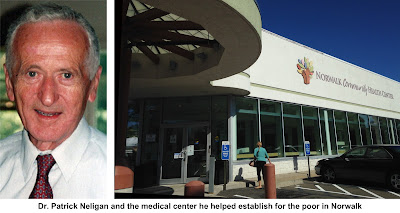 Dr. Patrick Neligan:
Raising Health Standards
In 1970, when Dr. Patrick Neligan was appointed Ridgefield’s director of health, the town was in serious trouble. Scores of septic systems, some only a few years old, were failing because of poor design and improper installation and placement. Wells were being polluted. Restaurants weren’t being inspected.
“This town needs some drastic changes for the better,” Dr. Neligan warned the selectmen.
Dr. Neligan was appointed and immediately created the town Health Department. He  hired George Frigon as the town's first full-time, registered sanitarian, and the quality of health-related services immediately began to improve.
In the 34 years that followed, Dr. Neligan, through the Department of Health,  ensured strict compliance with the state’s public health code.
In 1985, he also initiated and aggressively promoted the concept of having paramedics provide around-the-clock medical care through the Ridgefield Fire Department, and the next year, they were in place. In 1974, working with the Ridgefield Visiting Nurse Association, he established the annual spring Health Fair that has continued to this day.
A native of Ireland, Patrick Neligan was born in 1926 and graduated from the University College Dublin School of Medicine in 1951. While attending medical college, he was editor of the “National Student,” a literary quarterly published by students of the university.
He came to the United States in 1954 on a fellowship to study at Cornell, sponsored by Sir Daniel Davies, who’d been physician to King George VI, and Sir Alexander Fleming, discoverer of penicillin who was a friend of Dr. Neligan.
In 1956, he and his wife, Veronica, moved to Ridgefield and he opened a family practice on Main Street. A year later, he joined the staff of Norwalk Hospital and in the years that followed he served on almost every committee of the medical staff and held many offices. In 1975, his peers elected him chief of staff and he served three two-year terms. From 1985 until his retirement in 1995, he was vice president of medical affairs, medical director and director of medical education.
In 1996, he was given the William J. Tracey M.D. Award for “exemplary commitment and philanthropic leadership” at Norwalk Hospital.
But retirement from the hospital and the practice of medicine did not mean retirement from promoting and advancing good quality medical care. Dr. Neligan immediately set about solving a problem that had long concerned him: The desperate need for good health care services for the people of South Norwalk.
No primary care physician had opened a private practice in South Norwalk in decades, and the poverty was so extreme that many people could not even afford transportation to go to the hospital for medical help.
“I know what it's like to be poor,” he said, recalling his work as a medical student helping the destitute in the slums of Dublin.
In April 1999, the 10,000-square-foot, state-of-the-art Norwalk Community Health Center opened. Today, an even larger successor facility cares for 12,000 of Norwalk’s residents, and provides over 48,000 medical office visits a year.
“Everyone in this country has a basic and fundamental right to quality health care — a place where the sick, the poor, and the indigent, can get quality health care in their own community,” Dr. Neligan said.
He retired as Ridgefield’s director of health in 2004 after 34 years in the job. 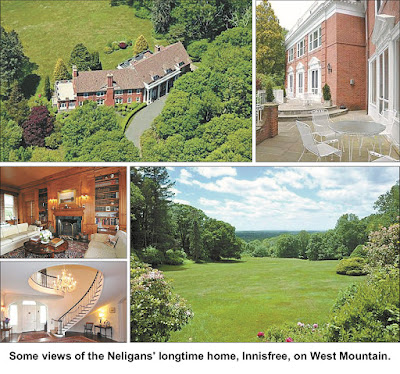 Patrick and Vera Neligan raised a large family in town. They lived at first on Main Street and then, in 1964, moved to an 88-acre estate, which they called Innisfree, off West Mountain Road.
In 2013, with Dr. Neligan in failing health, the couple moved to the Meadow Ridge community in Georgetown. He died a year later at the age of 88.
When he retired 10 years earlier, Helena Nicholas, head of the RVNA, wrote a tribute to Dr. Neligan, saying he’d “worked tirelessly to promote health and wellness in all settings — he has always been accessible and giving of himself….The community has a great deal for which to thank Dr. Neligan.”


He often volunteered at the RVNA flu clinics, and, Nicholas noted, at one clinic, “we recorded 250 vaccines given in under two hours' time, single handedly, by the good doctor.”