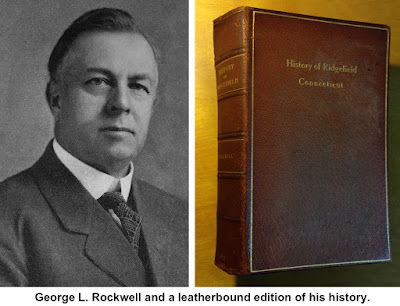 George L. Rockwell:
Mr. History
For George Rockwell, a man of several careers, history was a hobby. But it is not for his vocations, but for his “History of Ridgefield” that Rockwell is remembered today. Its 583 pages, published in 1927, provide a comprehensive look at the town’s first two centuries.
“That history is a reflection of the man, his interests, his family, his devotion to his beloved community,” Press Editor Karl S. Nash once wrote.
A descendant of Jonathan Rockwell, one of the founders of the town, George Lounsbury Rockwell was born in 1869 in New Haven, but came to Farmingville as a boy. He lived with his uncle and aunt, Mr. and Mrs. George E. Lounsbury — George was to become a Connecticut governor. The Lounsbury house and farm, The Hickories, later became Rockwell’s own home and is today still a working farm.
In 1888, Rockwell went to work for his uncle’s shoe factory in South Norwalk, remaining there 21 years and serving as a partner the last 16 years.
By the turn of the 20th Century, he was active in town and state politics. He served as state representative in 1904 and in 1937, as town treasurer,  as a member of the first Board of Finance in 1921, and as a justice of the peace. In 1904, he was a Connecticut delegate to the Republican National Convention that nominated Theodore Roosevelt.
His work for the GOP won him appointments as Ridgefield postmaster from 1912 to 1916 and again from 1924 to 1935 (his son, George L. Jr., was postmaster from 1949 to 1953).
President Taft named him U.S. deputy consulate general at Montreal in 1910 and he served there two years.
In 1938, he made an unsuccessful bid to be Fourth District congressman on the Republican ticket.
His “History of Ridgefield” was published in 1927, the same year the town marked the 150th anniversary of the Battle of Ridgefield. The book contains much information on the early settlement of the town, the Revolution, the community’s churches, schools, industries, and notable people. Some sections of the book had originally appeared as features by Rockwell in The Ridgefield Press over the first quarter of the century.
“He left no avenue unexplored, and considerable effort went into correspondence, personal interviews, examination of old records, and the study of countless tombstones,” wrote Smithsonian historian Silvio A. Bedini, author of “Ridgefield in Review.”
Rockwell’s history is also known for its extensive and detailed listings of Ridgefield veterans of all the wars from the French and Indian through World War I. Rockwell also provides many early 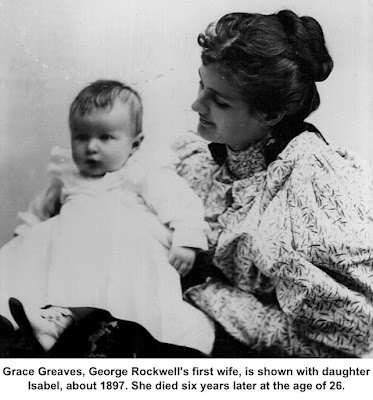 The volume is extensively illustrated with photos, mostly taken by Joseph Hartmann.
Rockwell had 1,500 copies of his book printed, some bound in leather, but most in cloth. Original copies today are rare, and can cost hundreds of dollars. A 1979 hardbound reprint of the book can be found used for anywhere from $25 to $175.
Rockwell died in 1947 at the age of 78. His first wife, Grace Frances Greaves Rockwell, died in 1903 at the age of 26, and his second wife, Anna D. Ryan Rockwell, was an aunt of Pat Ryan Nixon, wife of the president. She died in 1943.


Though history was an avocation,  George Rockwell was well-known and respected for his knowledge of Connecticut’s past, so much so that Duquesne University in Pittsburgh invited him to speak on the Western Reserve, originally part of Connecticut, at its 1938 commencement. Though he had never gone to college, the university awarded him an honorary doctor of laws degree.