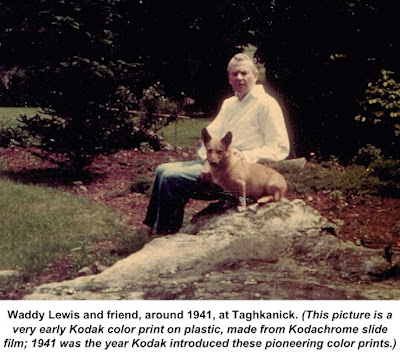 Wadsworth R. Lewis:
Millions in Gifts
Countless thousands of Ridgefield people have benefited from the “Lewis Fund,” but few have known who “Lewis” was.
Since it began distributing money in 1950, the Wadsworth R. Lewis Fund has given local charitable, educational or religious organizations more than $3.4 million. In today’s money, if inflation were calculated into those gifts, that’s more than $15 million in help.
Waddy Lewis would be pleased.
Born in Tarrytown, N.Y., in 1889, Wadsworth Russell Lewis was a son of Frederic E. and Mary Lewis. Around 1908 his parents bought the West Lane estate of Henry B. Anderson and began turning the 100-acre spread into one of the grandest of country homes of the era. Called Upagenstit, the estate is now the Ridgefield Manor, including Lewis Drive and Manor Road.
“Waddy,” as he was called, grew up in New York City and at Upagenstit. As a young man, he apparently led a life of leisure; at the age of 27, when he registered for the draft on June 5, 1917 in Ridgefield, he listed “none” as his occupation. But as World War I loomed on the horizon, he donated his yacht to the U.S. Navy to use to patrol New York Harbor. Soon thereafter, when he joined the Navy himself, he was put in command of his former vessel which patrolled New York Harbor. He later served in Washington as a lieutenant in the Censoring Department of the War College.
After the war, Lewis spent more time in Ridgefield. According to town historian Dick Venus, he enjoyed local sports and in the 1920s, even sponsored a Ridgefield baseball team, buying the uniforms and equipment, and paying some semi-pro players to beef up the squad. They came known as “Waddy’s All-Stars.”
Venus tells the story of one game at the old high school field on East Ridge at which Lewis, in an effort to please the crowd, offered $5 for each home run hit by a member of the Ridgefield team. “The offer was only a few minutes old when a conference with the opposing pitcher was held behind the old grandstand,” Venus said. “The result was an eruption such as has seldom been seen on any ballfield. Baseballs began to rain on Governor Street and some even reached the lawn of the state police barracks (now the Ridgefield Police headquarters).
“They were not fooling Waddy — he was well aware that he was being taken. However, he enjoyed the demonstration as much as the players and the fans, and he had a broad smile as each crack of the bat sent the ball soaring in the air.”
It wasn’t just athletes that Lewis helped out. In the late 1930s, he came to the rescue of The Ridgefield Press which, a couple years earlier, been purchased by the brothers Karl and John Nash. 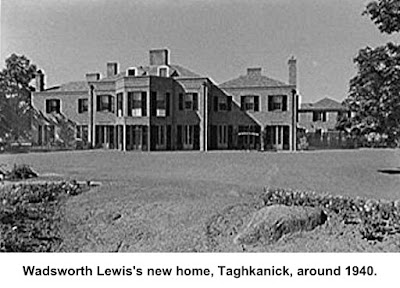 John, a longtime friend of Lewis, explained what happened: “My brother and I had the Ridgefield Press and in the early days, we were really struggling. The previous owner of the building sold it to us with a mortgage of $9,000. Rather unexpectedly one day, they approached us and wanted us to close out the mortgage.

“We, of course, didn’t have the money. We managed to negotiate them down to $3,000, but we didn’t have that either.
“Somehow, Waddy heard about it, probably through our mutual friend, Joe Donnelly, who was the attorney on the original deal. One day he showed up with a chauffeur-driven Lincoln, and told us that he was going to take care of the problem. He drove us down to New York to his bank. He asked the bank manager to arrange a loan at a favorable rate for his friends. The bank manager said, ‘Of course, Mr. Lewis. Would a rate of 2% be okay?’ That solved the problem for us and saved the paper.”
In 1934, Mary Lewis, by then a widow, sold Upagenstit. Waddy Lewis, however, enjoyed Ridgefield so much that he decided to build his own estate here in 1939, located between Limestone and Great Hill Roads. He called the place Taghkanick, an Indian word that some have translated as “wild place” and others, as a “clearing in a forest.”
Lewis’s parents were always interested in the welfare of the people in their town. That sense of community was especially strong in their son and particularly as he grew older, he became more interested in the “serious” side of community life. He became a member of the Board of Education, served on the Draft Board, and during World War II, the Ration Board. He was on the building committee that renovated the town hall around 1940.
He was also an award-winning grower of orchids, helped along by the premier orchid expert, John W. “Jack” Smith, who was his estate superintendent (also profiled in Who Was Who).
Lewis was also an avid golfer and among his many friends on the local links was Alex Santini, a well-known Ridgefield caterer, chef and restaurateur. At some point Lewis gave Santini a putter. But it was no ordinary putter and Santini was no ordinary player. According to Dick Venus, “it was an exceptionally large putter and weighed considerably more than the ordinary club.” Santini used it not only for putting, but for driving, pitching and chipping. “Compensating somehow for its flat face, Alex was able to tee off and send the ball great distances,” Venus said. With that one putter, “he was able to beat other good golfers who used a complete set of clubs.”
In 1941, Lewis became ill for several months. While he recovered he was noticeably more frail. On Nov. 3, 1942, shortly after returning home from a meeting of the local Draft Board, he suffered a heart attack and died; he was only 53.
Lewis had established the fund in his will, stating that grants should benefit non-profits “which are conducted in whole or in part for the benefit or use of the residents of Ridgefield and its vicinity.” However, he stipulated that it not begin functioning until his mother had died — the cost of her care would apparently affect the amount of the fund. Mary Lewis died in 1950.
And it was in 1950 that the Lewis Fund made its first grants, totaling $15,000 — that’s equal to about $152,000 in today’s dollars. By 1983, the annual grants had risen to $59,000 ($144,000 in today’s dollars).
In 2015, grants totalling $116,000 were made to some 45 organizations.
Thus, the grants today amount to about eight times more than when they began. Yet, thanks to inflation, their buying power is noticeably less.


Waddy Lewis’s Taghkanick later became the home of Henry and Clare Boothe Luce, and then of the rare-book dealer, Hans Peter Kraus (all three of whom are profiled here in the Who Was Who series). The house is still in use today, though much of the estate’s land has been subdivided in recent years.