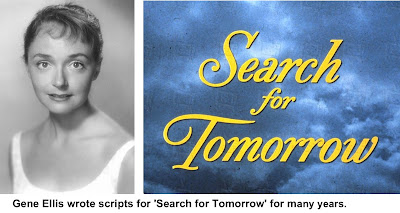 Gene H. Ellis:
Actress Turned Writer
Gene Ellis was talented on the stage, on the ice and on the typewriter. The former actress was for many years a writer of several of the most popular “soap operas” on television.
Born Gene M. Hufeisen in Seattle, Wash., in 1933,  she spent much of her childhood in Fairbanks, Alaska, where her father had a construction company. She began ice skating as a grammar school student. She also studied dance with a young man named Donald Saddler, who at the time was serving in the U.S. Army in Alaska, but who later became a Tony Award-winning choreographer for both Broadway and Hollywood.
She returned to Seattle to complete her high school education, and continued to study both skating and dance, but ultimately decided to pursue the latter. She majored in drama at the University of Washington, but quit after a year to move to Europe to work on her acting and dancing. She dubbed films in Rome and studied dance in Paris.
Ellis moved to New York City in 1953 to pursue her theatrical career. After winning dancing roles in summer stock, she made her Broadway debut in the Josh Logan production of “Wish You Were Here.”
Her husband, Ralph, noted that the production was “complete with onstage swimming pool — she lied about not being able to swim so she wouldn’t have to get wet eight performances a week.”
She then joined the national tour of the musical “The Boy Friend.”  She danced many major roles in summer stock, “always to critical acclaim,” said Ralph, who had been a fellow actor; they met and married in 1961.
Returning to New York City, she acted in several off-Broadway shows, including a   revival of Shaw’s “Buoyant Billions” and “Mrs. Warren’s Profession” and became a featured performer in both winter and summer stock, appearing with such actors as John Raitt and Howard Keel.
She also appeared on television in the 1957 musical special of “Pinocchio” with Mickey Rooney and Walter Slezak, and a year later she used her skating talents in the TV musical special, “Hans Brinker and the Silver Skates” with Tab Hunter and Dick Button.
In 1963, she retired from  acting and dancing — in her final performance, in the Paper Mill Playhouse production of “West Side Story,” she was two months pregnant.
By 1964 Ralph had also stopped acting and had turned instead to a career as a full-time writer of daytime television dramas. After the birth of their third child, the Ellises moved to Ridgefield in 1972 where their fourth  child — Ridgefielder Catherine Ellis Dulecki — was born.
That same year, her husband persuaded Gene to try writing scripts.
“Gene was always interested in writing,” Ralph said. “She wrote a weekly column for the Washington University paper when she was student there.  It was humorous in tone and had a large readership, including a female student, who wrote her ardent fan letters.  Needless to say, the fan was taken aback when they met and she discovered ‘Gene’ was a girl.”
In high school, she had won first place in a Seventeen Magazine contest for a short story that was subsequently published in the magazine.
Together with Ralph, and also separately, Gene wrote under the name Eugenie Hunt.
The Ellises wrote for many years in the 1970s and 80s for “As the World Turns,” the second 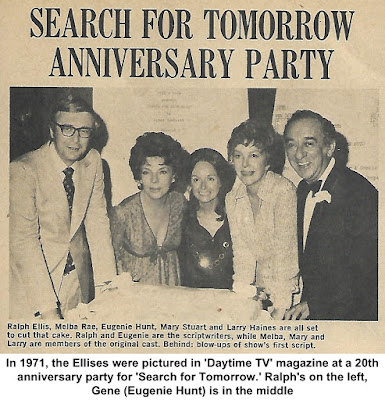 longest-lived of the television soap operas — started in 1956, it ran 54 seasons until 2010 (only The Guiding Light ran longer, by three years). For several years, they were the head writers on the show, which over the years had featured such budding young actors and actresses as Meg Ryan, Julianne Moore, Parker Posey, Matthew Morrison, Martin Sheen and James Earl Jones.

They also wrote many episodes of  “Search for Tomorrow,” a show that ran from 1951 to 1986. In all, Gene wrote nearly 500 episodes of the program. Among the future stars who appeared on ‘Search’ were Morgan Fairchild, Susan Sarandon, Jill Clayburgh, Kevin Bacon, Lee Grant, Sandy Duncan, Kevin Kline, and Wayne Rogers.
She and her husband were also head writers for “The Doctors.”  On her own, she wrote scripts for “Loving,” “One Life to Live” and “General Hospital.”
Having both acted professionally was an advantage for the Ellises. “An acting background is a tremendous help in writing scripts,” Ralph said. “While some might be total failures at novels, which require descriptive passages, actors are very adept at improvisation and transfer that ability to creating dialogue. The best writers we ever hired were actors.”
When her daughters, Catherine Dulecki and Susan Ellis, were teenagers, their parents sometimes sought their help. “They would often ask me and my sister to read a line or two and tell them if it sounded like something a teenager would say,” Catherine recalled.
Both young women also got a chance to be a part of a show.  “In 1984, my sister and I were in an episode where Jermaine Jackson and a relatively unknown Whitney Houston performed a concert in the fictional town of Oakdale on ‘As The World Turns,’” Catherine said.
Their brothers, Steve and Tom Ellis of Ridgefield, were also on “As the World Turns.”
In 1974  the Ellises won a Writer’s Guild of America award for best daytime show, “Search for Tomorrow.” In the years that followed Gene was also nominated for the Writer’s Guild Award for her work on “One Life to Live” and “Loving.”
Gene Ellis retired from writing in 1994, but remained active locally as a member of the Caudatowa Garden Club and volunteering at the Keeler Tavern Museum.
The couple had been married for 55 years when Gene died in October 2016 at the age of 82.
Over the years, the Ellises were often asked where they got their plot ideas. “We never used Ridgefield experiences in any direct way, although the tranquility of living here certainly provided a more comfortable creative atmosphere than our years in New York City,” Ralph said.  “Since we didn’t know any murderers, blackmailers, amnesia victims, and only a few adulterers, we made them up.”