Daniel Adams:
‘True Father of Baseball’
In 1857, Dr. Daniel Adams sat down, picked up a pen and wrote a document called  “Laws of Base Ball.” Nearly 150 years later, those long-forgotten sheets of paper sold at an auction for $3.3

million and added significant evidence to the belief that Doc Adams was, more than most early players, the man behind of modern-day baseball. The sale also set a new record for the highest-priced document in baseball history.

“He’s the true father of baseball and you’ve never heard of him,” said John Thorn, a noted baseball historian who was a consultant on the sale.
In Ridgefield,  Daniel Adams was well known to most folk in the mid-19th Century as a prominent citizen who was the first president of the Ridgefield Savings Bank. The retired New York City physician came to town in 1865 and bought the former home of Col. Philip Burr Bradley — a house later owned by the Biglow and Ballard families that stood in what is now Ballard Park.
By then, he had pretty much retired from the “national sport” he helped to establish. And few here knew of his prominence in fashioning the game.
Daniel Lucius Adams was born in a small town in New Hampshire in 1814. His father was a country doctor but unlike his Dartmouth graduate dad, Daniel went to Yale, Class of 1835. Three years later he earned his medical degree from Harvard and began practicing in New York City.
There Dr. Adams’ interest in athletics was whetted by the formation of the New York Base Ball Club in 1840. Five years later, he joined the Knickerbocker Base Ball Club, which is said to have played the first full game of baseball as we know it today, on June 19, 1846, at the Elysian Fields in Hoboken, N.J., with a team called the New York Nine. Adams continued to play for the Knickerbockers well into his 40s.
In “Total Baseball: The Ultimate Baseball Encyclopedia,” John Thorn has called Adams “first among the fathers of baseball.” He and other baseball historians credit Adams with setting up essentials of today’s game.
Adams was an early president of the Knickerbocker club, and served as its president six times between 1847 and 1861. While president he promoted rules changes that resulted in nine-man teams 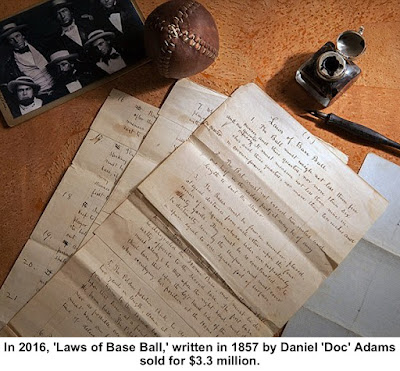 and nine-inning games. He is said to have created the position of shortstop.

He headed the rules and regulations committee when the National Association of Base Ball Players was formed in 1858. Among the changes he instigated were that bases should be 90 feet apart.
A savvy businessman, he was also involved in manufacturing both baseballs and bats.
Adams retired as Knickerbocker president and as a physician before he moved to Ridgefield. A few years earlier, in 1861, he had married Cornelia A. Cook and the couple had four children while living here; the last, a son, Roger, was born in 1874 when Daniel was 60 years old.
Here he became active in all aspects of the community.
In 1870, he was elected a Ridgefield representative to the State House of Representatives. A year later, in 1871, he helped form and became the first president of the Ridgefield Savings Bank  — clearly it was a wise move, for the bank grew steadily and is now the Fairfield County Bank with $1.6 billion in assets. He led the bank from 1871 to 1879 and again, from 1884 to 1886. Adams’s picture hangs in the bank’s main office on Danbury Road.
In 1876 Adams served on the building committee that erected the new “town house,” a building we now call the town hall. Unfortunately but not surprisingly, the structure was built of wood, the material most buildings were made of then. Less than 20 years later, the town house burned to the ground in the great fire of 1895 that destroyed much of the village. Its replacement was fireproof brick.
In 1880, he was elected the first president of the Ridgefield Library.
Adams also helped form the Land Improvement Association of Ridgefield, serving as its 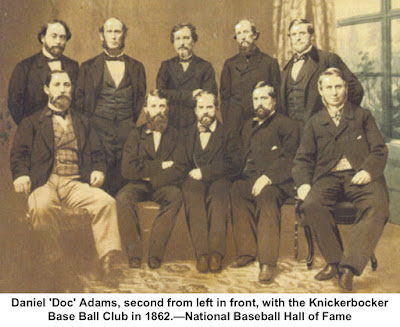 president. The 1877 Ridgefield Press article announcing the organization “did not state what improvements were to be made in Ridgefield lands,” wrote Karl S. Nash in a 1971 profile of Adams. (Nash was not a fan of baseball or other sports, and devoted relatively few words to Adams’s baseball past, but he did note that the Doc dug two cannonballs from a retaining wall on his Main Street property. “Presumably, they were fired at the Battle of Ridgefield on April 27, 1777,” Nash said.)

In 1971, one of those cannonballs was owned by Adams’s grandson, Daniel Putnam Adams, who happened to live in nearby Wilton. He himself was a retired banker, from New York City.
Doc Adams played his last formal round of “base ball” on Sept. 27, 1875, in an oldtimers game that was arranged by a longtime fellow Knickerbocker star, James Whyte Davis. However, he continued to play “backyard ball” with his sons even when he was in his 80s.
In 1888, Adams, age 74, moved his family to New Haven, the city of his alma mater. There he died in 1899.


Daniel Adams was an amazingly modest man who one baseball historian said “didn’t like to brag.” In 1881, Yale asked him for a biography for a historical record of the Class of 1835, and Adams wrote not a word about his leadership in creating the by-then popular sport of baseball. “The current of my life has been very quiet and uniform, neither distinguished by any great successes, or disturbed by serious reverses,” he said. “I have been content to consider myself one of the ordinary, every-day workers of the world, with no ambition to fill its high positions, and have no reason to complain of the results of my labor.”