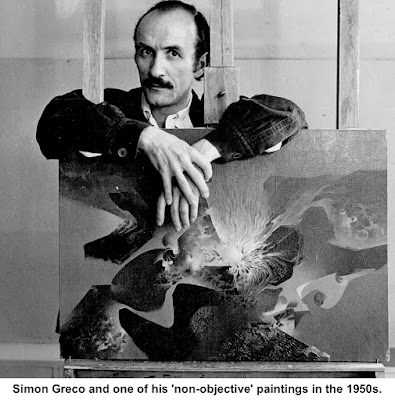 Simon Greco:
Outspoken Artist
Artists in Ridgefield have tended to focus on their art and avoid the political limelight. Not so with Simon Greco, who spoke at many meetings, penned many letters to the editors and challenged laws, budgets, schools and other matters.
However, though even The New York Times covered his feisty ways, Greco was much better known nationally for his art, not his complaints.
“Simon Greco was an extraordinary artist,” said art historian Terence E. Hanley. “His work is mesmerizing.”
A native of Italy, Simon Greco was born in 1917 to an Italian-American father and an Italian mother.  The family came to the United States in 1921 and settled in St. Louis where his father 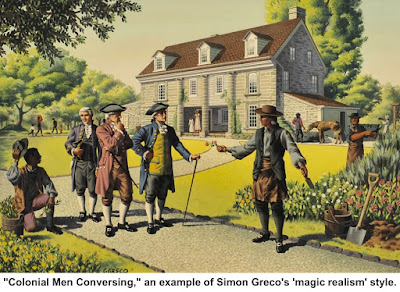 worked for a gas company. Greco said that St. Louis abounded in cultural opportunities and that his early art education was acquired at the St. Louis public library. His formal education consisted of two years of high school and two years of vocational training.

“Almost entirely self-educated, Greco is widely informed in such diverse arenas as philosophy, religious history, literature, and music,” said a 1952 profile of him in the Bridgeport Sunday Post.
By the 1940s, Greco had moved to New York to do commercial art as well as his own work. He was best known for his “magic realism” paintings, a style that was popular in the mid-20th Century, and was considered an expert at it. He became well known for two series he illustrated for Life magazine, The World We Live In in 1953 and The Epic of Man in 1956. He also painted many covers for magazines during the 1950s and 60s.
Greco’s moving to Hayes Lane in 1949 helped inspire a second direction in his art.    “Since moving to Ridgefield, my thoughts have turned more and more to the manifestations of nature with which we are surrounded, and with the problem of extending the range of ideas and thoughts which 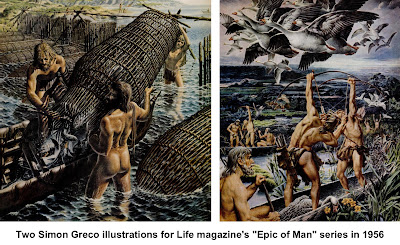 could be adequately handled by non-objective art,” he told The Post.

He began painting non-objective works — what some consider abstract expressionism — while continuing to produced the “magic realism” pieces. And it was the latter that were more popular. His works are in the  Smithsonian Institution, the American Museum of Natural History, the U.S. Naval Academy, and other collections.
In Ridgefield, he became involved in the community, and was a frequent voice at town meetings and in letters to the newspaper. A Democrat, he tried in 1963 to vote in a Republican primary here in an attempt to challenge what he considered a flaw in a state law. He was unsuccessful, but his effort was covered by The Times.
He was a voice of conservatism when it came to schools, going so far as to maintain that libraries in elementary schools were wasteful. He felt that the proposed Ridgebury School should not be a spread-out affair, but an efficient, two-story, box-like building with many fewer toilets than planned. “I think it is absurd to have 12 rooms with separate toilets — if the children are so retarded beyond kindergarten that they require such toilets, then they should be in special schools,” he wrote in 1960.  “We should not waste tax money on extravagant buildings. We should spend it instead where it will do the most good, that is, in securing the best teachers, books and educational materials available.”
Perhaps Greco felt a closeness to teachers and books. He himself taught at at various institutions in Fairfield County and, in 1968, he wrote the book, “The Art of Perspective Drawing,” for the well-known Grumbacher series.
Nonetheless, Greco criticized the way art and the arts in general were taught.  Speaking at a gathering with the Connecticut Commission on the Arts in 1964, Greco was quoted as saying, “With 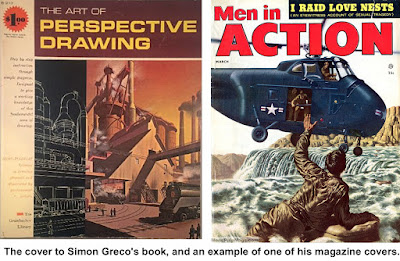 everyone taking up art in schools, colleges and adult classes, art is constantly being thrown at the public and a general vulgarization of theater, books, music, and art has descended upon us,” he declared. “When you cater to the masses on a cultural level, you debase the arts. Instead of education and elevation, our society is getting entertainment. Art is not entertaining.”


In 1964, Greco moved to North Salem Road and a few years later, relocated to Fairfield after joining the staff of the University of Bridgeport. He later lived in Westborough, Mass., where he died in 2005 at the age of 87.

Thank you for this. I'm an admirer of Greco's beautiful geological paintings in The World We Live In and The Wonders of Life on Earth which fascinated me as a child. While his historical painting look somewhat unreal, his style had a different effect when applied to cross-sections of landscapes, making the Earth look like a living thing.

I personally knew an artist named Simon Greco, living in Connecticut, who passed on circa 1995. He was a great friend of my mother’s, now 94 years old,. She and I lived in Southport CT. The last time we visited, he had lost his vision, a condition which had developed in the prior years. Sorry, do not remember or have tags for specific dates.

I have an original oil, as well as an etching of Simon’s. Either then oil or the print were “ dedicated” to her, although I don’t know if that means anything. Or which, unless it helps.

Is he the same artist as your Simon Greco? Just looking for more info.

Would be happy to attach pix of both works if you wish.

I cannot answer Unknown's question, but Greco was widely known in Fairfield County. He died in 2005, however, not ca. 1995, and was living then in Massachusetts.

I have an original painting that Simon gifted to my parents. It is one of my most prized posessions. He was a frequent fixture in our home and I have lovely memories of him smoking his pipe. As a child I thought it exotic. At one point my mother and I went to his home in Fairfield and I commented on the beautiful wood stairs. He told me to look very very close. The risers were not wood and that irritated him so he painted matching wood grain on all of them. I'm still shocked and laughing at that.

This is great!Simon Greco, the artist, also lived in Washington State for a few years. When I was 13, my family moved into his neighborhood, and my mother became friends with Simon's wife. Through that connection, I met Simon and started taking art lessons from him, until we moved (and he soon moved back to Massachusetts, where he passed on). I remember he smoked a pipe, played vinyl records of classical music, and he didn't like the work of Norman Rockwell (perhaps a competitor for work, earlier on?).

I still have some of the drawings I did with Simon, a couple letters he wrote me, and I even use the same 'pochade box' he gave me to store my brushes and paints. He was my very first art mentor, and I still make art to this day (I am now almost 40), thanks in part to him. Thank God for the 'angels along the way.'