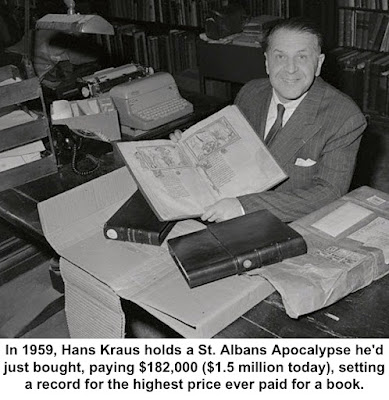 Hans P. Kraus:
Dachau Survivor Who Cherished Books
When Hans P. Kraus came to this country as a refugee escaping the Nazis, he had only $500 and a handful of books. By his death in 1988,  Kraus was one of the world’s most renowned rare-book dealers — a man who had owned one of the three Gutenberg Bibles still in private hands and whose collection included a copy of the Declaration of Independence and a first printing of the U.S. Constitution.
He was also a major benefactor of the Library of Congress. In 1969, he donated 162 historical documents spanning 300 years of colonial Spanish America, including a narrative by Amerigo Vespucci of his four voyages to America between 1497 and 1502. The gift made the front page of The New York Times, accompanied by pictures of both Kraus and Vespucci.
“This is a modest token of my gratitude and sincere thanks to the United States, a great nation whose hospitality and spirit of freedom and equality have made it possible for me, once a poor refugee, to attain a decent place in free human society,” Kraus said at the time. 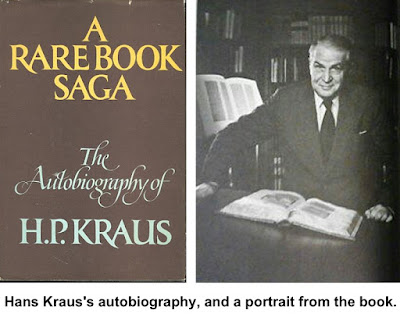 The son of a professor who was also a bibliophile and noted stamp collector, Hans Peter Kraus was born in Austria in 1907. As a young teenager, he began collecting — and selling — books. “He frequently picked up an honest krone by buying an old book at one antiquarian shop and selling it at a modest profit to a dealer a block or two away,” said   John T. Winterich in a 1960 profile in Publishers’ Weekly.
After working for a couple of antiquarian book dealers, Kraus established a rare-book business in Vienna in 1932. Six years later, after the Germans annexed Austria, he was arrested as a Jew and interned at the concentration camps in Dachau and Buchenwald for more than a year before friends were able to obtain his release, provided he abandon his homeland. He had to leave behind a collection of 100,000 books.
He arrived in New York on Columbus Day, 1939. That happened to be also his birthday, “which he felt was a very good omen,” said his daughter, Mary Ann Kraus Folter.
With the help of friends and family in this country, he started a new dealership, H.P. Kraus, in a two-room flat in Manhattan. His business grew to the point where, in 1960, he had 16 employees and was world-famous for his vast inventory of rare publications.
Over the years he acquired some of the most famous books and manuscripts in the world, and helped raise the nature of the business to a more sophisticated level.
“Dealers are scholars,” he said in 1967. “We are not tradesmen.”
One biographer called him “without doubt the most successful and dominant rare-book dealer in the world in the second half of the 20th Century.”
He set a world record for the highest price ever paid for a book when, in 1959, he spent $182,000 ($1.5 million in today’s dollars) for a 13th century St. Albans Apocalypse, a very early movable type edition of the last book for the Bible.
Kraus’s Gutenberg Bible, acquired in the early 1970s, was sold in 1978 to the Gutenberg Museum in Mainz, Germany, for $1.8 million ($6.7 million today).
Kraus wrote many books and pamphlets, including “Sir Francis Drake: A Pictorial Biography.” His autobiography, “A Rare Book Saga,” has been called “a rare-books version of the memoirs of Casanova.”
In 1966, he and his wife, Hanni Zucker Kraus, bought the former home of Henry and Clare Boothe Luce on Great Hill Road. Kraus died at the age of 81 and Hanni Kraus soon moved away, but kept the rare book business on operation until her death in 2003.
The Krauses made a number of significant contributions to libraries. Among their gifts to the Library of Congress is the Hans and Hanni Kraus Sir Francis Drake Collection, which contains early books, manuscripts, maps, and memorabilia related to Drake's explorations.


Kraus was once asked by The Washington Post whether he ever read the rare books he owned.  “Read them?” he replied. “Books are to be admired. To be studied. To be cherished — not to be read. The worst thing you can do to a book is to read it. That’s what paperbacks are for.”