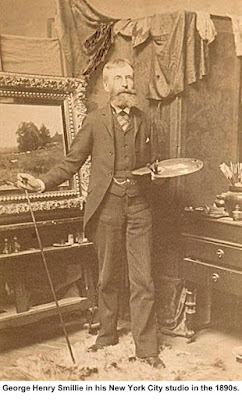 George Henry Smillie:
Artist of Old Ridgefield
One trip to the West gave George Smillie years of inspiration. And so did Ridgefield.
A leading American landscape artist at the turn of the 20th Century, George Henry  Smillie lived for many years on Main Street in the house just south of the Keeler Tavern. Here he painted scenes both local and quite distant.
Born in New York City in 1840,  Smillie (rhymes with Millie) belonged to an active and influential family in the city’s art circles. His father was an engraver who transferred many landscape paintings of noted contemporary artists into engravings, which were popular in the 19th Century. “Quite naturally then,” the Smithsonian American Art Museum says, George “was able to embrace a wide range of landscape subjects, from quiet New England meadows to bold mountain passages and rocky coastlines.”
His older brother, James David Smillie, was also a painter and instructor with a fine reputation.
George studied in Europe and under James McDougal Hart, a well-known American landscape artist.
In 1871 Smillie headed west, sketching and painting, particularly the Rockies and California’s 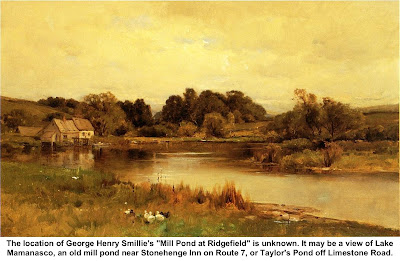 Yosemite Valley. Many sketches served as models for years of oil and watercolor landscapes he was to paint in New York City, Ridgefield and Bronxville, N.Y., where he lived over the years. Many of the resulting paintings showed mountain scenes as well as American Indians.

He also painted scenes he saw locally, and one of his most interesting Ridgefield works is a view of the old Stebbins homestead, painted in 1892 shortly before the house was torn down to make way for the Casagmo mansion (which itself was torn down).
However, probably his best-known local picture is “Mill Pond at Ridgefield.” Another, called simply “Near Ridgefield,” is also an excellent example of his work. Both are in private collections.
Besides the Smithsonian, his work is in the collections of many  major museums including  the 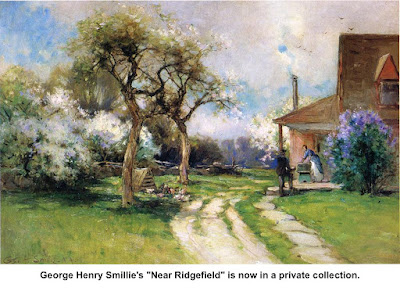 Metropolitan Museum of Art, the Brooklyn Museum, the National Gallery of Art in Washington,  and the Museum of Fine Arts in Boston. His paintings have fetched as much as $130,000 at recent auctions.

Smillie exhibited extensively including at such major venues as the Boston Athenaeum, the Salmagundi Club, the Art Institute of Chicago, the Pennsylvania Academy of  Fine Arts, and the 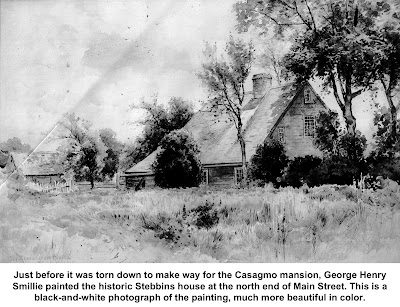 Corcoran Gallery at Washington. He exhibited almost every year at the National Academy of Design from 1862 to 1921, becoming a full academician in 1876. The Society of  American Artists honored him with a medal in 1907.


The National Gallery of Art, which owns several Smillie works, said Smillie “was less interested in objectively rendering optical effects than in conveying feelings and moods through his strikingly simplified compositions. He marveled at the fact that while landscape painting could be defined as a horizon crossed by a diagonal, it was a formula capable of expressing an endless variety of emotions.”