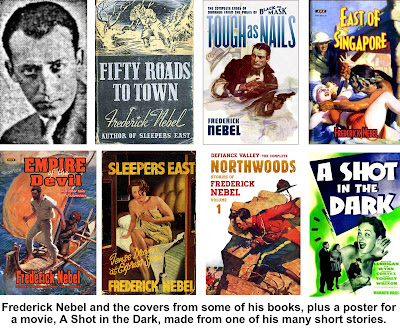 Frederick Nebel:
Hero of Pulpdom
In 1955, Frederick Nebel marked the 25th anniversary of his career as a full-time writer. “In that quarter century,” The Ridgefield Press said, “he has, by his own estimate, pounded out more than 4,000,000 words on his three typewriters — in the form of novels, novelettes, short stories, and articles.”
Many of those words were for some of the classic “pulp” magazines of the 1920s and 30s, such as Black Mask and Dime Detective. He and his friend, Dashiell Hammett, were leading producers of the era’s noir style of  hard-boiled detective tales.
Seven of his stories were turned into Hollywood films, and many more movies sprang from characters he’d originated.
A native of Staten Island, N.Y., Louis Frederick Nebel was born in 1903 and dropped out of school at the age of 15. He worked on the docks, sailed on tramp steamers and labored as a farm hand  in northern Canada until he was in his early 20s and began to write for money.
His first story appeared in Black Mask in 1926 and he soon created the MacBride and Kennedy series of mysteries about a police detective and a hard-drinking newspaper reporter. He later sold the rights to Hollywood, which turned the boozing male Kennedy into a  female   named Torchy Blane, and nine movies — not involving Nebel — resulted. “Hell, they always change the stuff around,” Nebel said when asked about the movie series. “But I don’t mind — as long as I don’t have to make the changes.”
Despite his output, he wrote only three novels; today titles are so prized that first editions of Sleepers East (1933), But Not the End  (1934) or Fifty Roads to Town (1936) may fetch as much as $1,300. Sleepers East, which The New York Times Book Review said has a “full measure of action, suspense and emotional conflict . . . and thrills a-plenty,” was made into a 1934 movie. (Actor, raconteur and concert pianist Oscar Levant worked on the screenplay.)
After he and his wife, Dorothy, came to Ridgefield in 1934, his popularity continued to rise and he began writing for “slick” magazines such as Collier’s.
Unlike many writers and artists who’ve lived here,  Nebel became active in the community. During World War II, he was a member of the War Price and Ration Board and later served as one of the first members of the Zoning Board of Appeals — including stints as its chairman.
However, in the late 1950s, after he became ill, the Nebels moved to Laguna Beach, Calif. where he died of a stroke in 1967 at the age of 63.
Long after his death, Nebel is being rediscovered and collections of his short stories are being published as books. His complete series of Dick Donahue private detective stories, published in the 1930s in Black Mask, were collected in a 2012 anthology, “Tough As Nails.” A year later, “Raw Law: The Complete Cases of MacBride & Kennedy Volume 1: 1928-30,” came out. They and other Nebel collections are still in print.
“While Nebel's work is not as well known as his good friend Hammett...he deserves to be read and reread as a hero of pulpdom,” said Hugh Lessig, a writer and student of the “hardboiled pulps.”