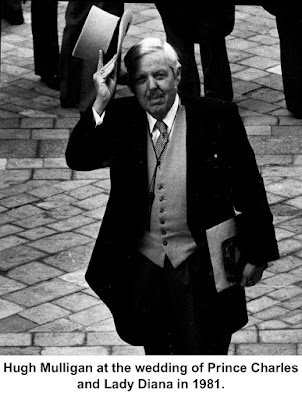 Hugh Mulligan:
Globe-Trotting Journalist
Few people have seen the world as Hugh Mulligan had.
He drank with John Steinbeck, covered the death of three popes and President Kennedy, was the only reporter — British or American — at the wedding and the funeral of Princess Diana, and was dining with Salvador Dali when the artist was booted from a restaurant because his ocelot defecated on the floor.
He covered both the rise and fall of the Berlin Wall, accompanied Pope John Paul II on two dozen journeys, went to the North Pole in a Navy blimp, and rode an 18-wheeler up the Alcan Highway in the middle of winter.
Mulligan had thousands of stories to tell of his half century as an Associated Press reporter, covering everything from wars to weddings, in 146 countries.
A favorite anecdote concerned Steinbeck, with whom Mulligan had tried for months to get an interview at the author's Long Island home.  He gave up when he had to go to Vietnam. Three weeks later,  Steinbeck checked into the same Vietnamese hotel where Mulligan was staying. When the author, whose wife was trying to wean him off alcohol, discovered Mulligan had liquor, he started visiting the reporter’s room every night.
“I finally had to tell him, ‘Steinbeck, for three months I couldn’t get an interview with you and 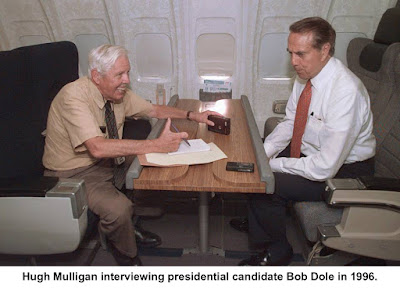 Mulligan earned many awards, but his most prized was the 1967 Overseas Press Club Award for his coverage of the Vietnam War (about which also he wrote one of his three books, “No Place to Die: The Agony of Vietnam”).
A native of New York City,  Hugh Aloysius Mulligan was born in 1925. He served in World War II as a rifleman in the Army's 106th Infantry Division in Europe. After the war, he resumed his schooling, graduating summa cum laude from Marlboro College in Vermont. He then earned a master's in English from Harvard and one in journalism from Boston University, both awarded in the same week without either school knowing he was also attending the other.
After a stint teaching Latin and Greek in Boston, Mulligan joined AP in 1951 in Baton Rouge, La., and after 1956 was based in New York, except for a 1970s assignment in London. He retired in 2000.
A devout Catholic who had once studied for the priesthood, he covered 26 trips made by Pope John Paul II. He was so nervous when he met the pontiff for the first time that he dropped a bag of rosaries. But the pope blessed them, “even the broken ones,” Mr. Mulligan wrote later.
The Associated Press reported that “colleagues joked that Mr. Mulligan could find a way to mention the Catholic church in any story, no matter the subject. He said the first person he visited in any new place was the local priest, because ‘they always know what’s going on.’”
Among the many celebrities he interviewed were Marilyn Monroe, Margaret Thatcher, the Shah of Iran, John Glenn, Joe DiMaggio, Bob Hope, Brendan Behan, Tennessee Williams, James Jones, and, of course, John Steinbeck.
Mulligan moved in Ridgefield in 1977 and occasionally wrote columns about his experiences 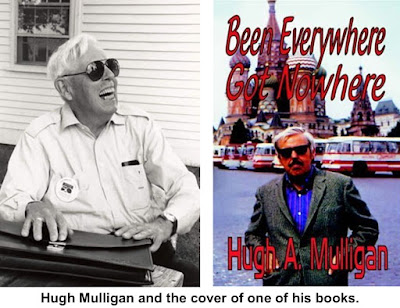 He was a voracious reader and diligent researcher who “gloried in finding obscure nuggets of fact and history,” a colleague once said. His Ridgefield home, which he named “Hardscribble House,” featured a wall-size bookcase with the works of Irish writers.
He often sent observations to The Ridgefield Press and in 2001, when the current fire chief, also an amateur actor, retired from firefighting to pursue his avocation, Mulligan offered this letter:
“Now that Dick Nagle has hung up his chief’s helmet and turnouts to pursue an acting-singing career, he might put together a cabaret show of old firehouse favorites. Like:
“Smoke Gets in Your Eyes.
“Hot Time in the Old Town Tonight.
“I don’t Want to Set the World on Fire.
“Too Darn Hot.
“My Old Flame.
“Setting the Woods on Fire.
“Having  A Heat Wave.
“Great Balls of Fire.
“My Heart Burns from Firehouse Cooking.
“Days of Lines and Hoses.
“Hunk of Burnin’ Love.
“Good Night Si-reen.”
Mulligan died in 2008 at the age of 83.
“Hugh's beat was mankind,” former AP president Louis D. Boccardi said at Mulligan's death. “He had a love affair with the world, and we of the AP loved him for it. There won’t be, there can’t be, another Hugh Mulligan.”


Joe Pisani, a Hersam Acorn Newspapers writer who had known Mulligan for 30 years, called him “a man who epitomized all that was honorable about journalism back before accountants and ad directors invaded the newsroom, back before publishers threw around terms like monetize and user-generated content as if they were voodoo incantations that could save this business, back before it was fashionable for journalists to wear their opinions on their sleeves.”