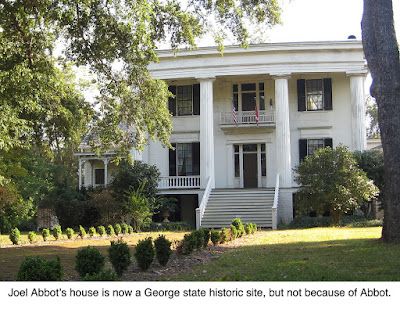 Joel Abbot:
First Native Congressman
Ridgefield was the birthplace of three United States congressmen, but not one is remembered today by more than a handful of Ridgefielders — if that many.
The first native-son member of Congress was Joel Abbot, born here on March 17, 1776. His parents are unknown — there is no record in town hall of his birth, although official Congressional records say he was born in Ridgefield, Conn.
Abbot probably spent his early years in town, but perhaps tiring of the cold winters of Connecticut, and maybe taking advantage of land grants that were available, his family may have moved to Georgia in the 1790s.
Abbot was probably living in the town of Washington, Ga., by 1794; he eventually became a physician there.
As a young man, he had a seat on the city council. In 1799 and for several years thereafter, he was elected a representative to the Georgia state House of Representatives.
By 1817, apparently very popular with the people in his region, Abbot ran for Congress, and won. He continued to serve as a congressman until 1825.
In 1820, Dr. Abbot was a delegate to the first convention in Philadelphia, Pa., that prepared the original edition of the National Pharmacopoeia. The U.S. Pharmacopoeia today sets the standards for the identity, strength, quality, and purity of medicines and food ingredients. In our times USP’s drug standards are enforced  by the Federal Food and Drug Administration.
Abbot died in 1826, a year after leaving Congress, suggesting that perhaps he retired from political life due to ill health.
Sometime around the turn of the 19th Century, Abbot built a fine home in Washington that is today a National Historic Landmark and Georgia state historic site, open to the public. However, it’s not Dr. Abbot who made the house famous, but Robert Toombs, who bought the place in 1837, gussied it up and lived there many years.
Toombs also was elected to Congress and then to the U.S. Senate, where, while he supported slavery, he opposed the South’s separating from the Union. After the Civil War broke out, however, Toombs became the secretary of state for the new Confederate States of America. Following a dispute with Jefferson Davis, its president, he quit and became a general in the Confederate army.
When the war ended, Toombs fled the country, but eventually returned to the house Abbot built and became a successful lawyer.