An African-American
Who Fought
— and Died — In the Union Army

Few people today realize that a half dozen African Americans from Ridgefield served in the Civil War — even though, thanks to the 1850 Dred Scott Supreme Court decision, they weren’t even considered citizens of the United States. That’s probably because their stories have never been told.

A remarkable example was John Smalley, who was too young to enlist on his own, and who became among the last Union soldiers to die in the service of his country.

Born around 1846 on Ned’s Mountain in Ridgebury, John S. Smalley was only six years old when his father died. His mother passed away two years later, leaving him an orphan. He was probably cared for by his aunt, Betsy Watson, until he got older.

At some point Frederick Starr became John’s “guardian.”  Starr, who in 1860 was a 28-year-old butcher with a wife and two small children,  lived on Elm Street in Danbury. He later operated a grocery store in that city. 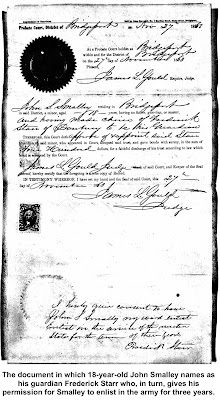 Smalley may have been in training with Starr  to become a butcher. However, when Smalley was only 18 years old and volunteered to join the Union Army, he gave his occupation as “laborer,” a wide-ranging term that could include anything from farming to ditch digging. And he gave his birthplace as Ridgefield and said his residence at that time was Bridgeport.

Since he was not yet an adult, Smalley needed the permission of a parent or guardian to sign up. In an affidavit dated Nov. 27, 1863, Frederick Starr stated: “I hereby give consent to have John S. Smally, my ward, enlist in the service of the United States for the term of three years.”

He was assigned to Company B of the newly created 29th Colored Volunteers — a regiment so called because military units in the Union Army were segregated (even though they’d been integrated in the Continental Army 90 years earlier).

The men of the 29th were often paid less than their white counterparts and suffered other forms of discrimination. They may even have been cheated out of money due to them for their service. In a history of the 29th Regiment, Sgt. Isaac J. Hill described “the inducements held out to men to join this Regiment” including: “They were to receive a bounty of $310 from the State, $75 from the County from which they enlisted, and $300 from the United States. The $310 from the State we received, the other bounties we did not receive.” Hill was an African-American who served as a regiment orderly, probably because he could read and write. He was also a minister.

The 29th spent a couple of months training in New Haven — today, a monument to the regiment stands in New Haven’s Criscuolo Park where the training took place; it lists on its stones the names of all the members of the regiment.

The 29th left for Beaufort, S.C., in March 1864. “Never did my ears hear, or my eyes perceive, or my heart feel the strong yearnings of nature as they did at that moment,” Hill wrote. “Mothers weeping for their sons, and wives for their husbands, and sisters for their brothers, and friends for their friends, that were then on their way to the scene of conflict. White and colored ladies and gentlemen grasped me by the hand, with tears streaming down their cheeks, and bid me bye, expressing the hope that we might have a safe return.”

After a brief stint at Beaufort and Hilton Head, which had been taken earlier by Union troops, the regiment was sent to Virginia where it participated in the fighting to take Petersburg and Richmond. Like so many engagements in the Civil War, the battles were fierce and the aftermaths ugly. “When I looked upon the dead and wounded, it was awful to see the piles of legs and arms that the surgeons cut off and threw in heaps on the ground,” Hill wrote.

During this fighting on Oct. 27,  John Smalley was wounded “while on the skirmish line.” His casualty report said he suffered a “severe” spine injury. 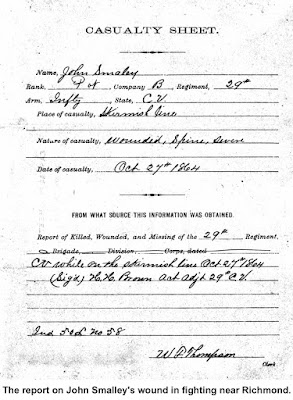 Hill did not think much of the medical attention injured Black soldiers were receiving. “Many ... cases could be saved by a little care and attention after the battle, but the complexion and rank of a man has a great bearing,” he said. “There was a great distinction made among the wounded, so much so that it would make the heart of any Christian ache to see men treated so like brutes.”

Despite this, Smalley recuperated and was back in service within a few weeks, though he seems to have been reassigned to less stressful work as a company cook instead of a soldier.

Members of the 29th were among the first Union troops to enter Richmond after it was abandoned by the Confederacy in 1865. And on April 4 they witnessed a visit by the President. As Abraham Lincoln walked more than a mile from the James River to Jefferson Davis’s former headquarters, many people lined the street cheering. Wrote Hill:

All could see the President, he was so tall. One woman standing in a doorway as he passed along shouted, “Thank you, dear Jesus, for this sight of the great conqueror.” Another one standing by her side clasped her hands and shouted, “Bless the Lamb — Bless the Lamb.” Another one threw her bonnet in the air, screaming with all her might, “Thank you, Master Lincoln.” A white woman came to a window but turned away, as if it were a disgusting sight. A few white women, looking out of an elegant mansion, waved their handkerchiefs. President Lincoln walked in silence, acknowledging the salute of officers and soldiers, and of the citizens, colored and white. It was a man of the people among the people. It was a great deliverer among the delivered. No wonder tears came to his eyes when he looked on the poor colored people who were once slaves, and heard the blessings uttered from thankful hearts and thanksgiving to God and Jesus. The gratitude and admiration amounting almost to worship, with which the colored people of Richmond received the President must have deeply touched his heart.”

Toward the end of April, the 29th sailed from Richmond for Norfolk via the James River. “We left many kind and weeping friends standing on the wharf bidding us God speed, and wishing us a safe return,” Hill reported.

From Norfolk, the regiment sailed for south Texas, with a stop at New Orleans. The troops arrived at Brazos July 7, part of a 50,000-man force along the Gulf Coast and the Rio Grande dealing both with relations with Mexico and with the beginnings of reconstruction in Texas. Only two months earlier, what some have called the last battle of the Civil War took place outside Brownsville — after the Confederate States had ceased to exist. In the skirmish at Palmito Ranch May 12 and 13, the Confederates overcame a Union Army attack.

To reach the military base at Brownsville, the 29th’s troops had to march 20 miles inland through mosquito-infested marshes and waters sometimes waist deep.

“It had not rained in this part of Texas for six weeks, and yet the mud in the roads was in places up to a man’s knees and for miles hub deep,” Hill recalled. “I was astonished to see the many stragglers strewed all along the road.  Many of them died and were buried in the forest, with nothing to look at their graves but the wild beasts of prey.”

Many members of the regiment became sick and wound up hospitalized, including both John Smalley and Isaac Hill. 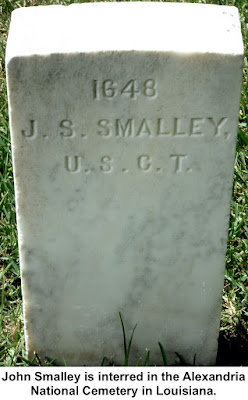 It was a nightmare, Hill recalled. “There were seven hundred sick in this hospital, four hundred of that number in the ward with me,” he wrote. “The hospital stewards and nurses were men with no human feeling. The poor sick were dying ten per day and before they were cold the hospital stewards would search them, and take anything valuable that they found about them before they reported them dead. It would be impossible for me to tell the many instances of cruelty perpetrated on the poor sick soldiers by the hands of these colored stewards. They acted more like demons than human beings. The fare was also very bad; we had two pieces of bread and a pint of coffee per day.”

Hill survived. John S. Smalley didn’t — he died of dysentery on Sept. 27 in that “hospital.”

During its war service, the 29th Regiment lost a total of 198 men, including 45 killed or mortally wounded in battle. More than three times the battle casualties  —  153 men — succumbed to disease.

Two days after Smalley died, word was received that the regiment was ordered home to Connecticut, where it was disbanded. 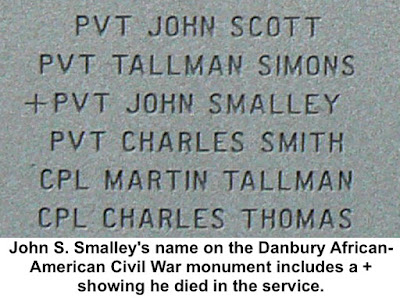 Smalley was buried in a national cemetery on the post at Brownsville. However, in 1909,   more than 1,500 soldiers who were buried at Fort Brownsville were moved to Alexandria National Cemetery in Pineville, La. Thus, John Smalley’s remains lie today in the Deep South, a land whose soldiers he had fought and from which fled slaves that his grandparents, “Uncle Ned and Aunt Betsey” Armstrong, had assisted at their station of the Underground Railroad on Ned’s Mountain in Ridgefield.

Although he was born in Ridgefield, the name of John Smalley is not found on any monument or in any history book in his native town. However, it is engraved in stone in Wooster Cemetery in Danbury. There, a monument dedicated in 2007 honors African Americans from greater Danbury who served in the Civil War.