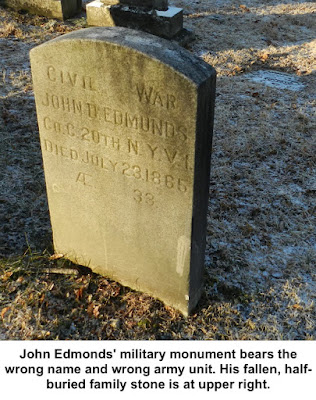 Too often  people of talent and promise are lost to war. Such was the case with John Edmonds, but it wasn't a Civil War bullet or blast  that ended his military career and may have contributed to his early death. And, amazingly,  his 80-year-old widow was reapplying for pension benefits more than a half century after his death.

John D. Edmonds was born in Ridgefield in 1832, a son of Robert Chauncey and Abby Darling Edmonds who lived on Silver Hill Road,  a short distance west of Wilton Road West. By 1850, when he was 18, Edmonds was teaching at one of Ridgefield’s one-room schoolhouses. (His father, Robert, was an official of the Flat Rock School district, but the Flat Rock school committee did not employ John.)

He met Harriett Eliza “Hattie” Edmond, a first cousin with a “singular spelling,” and they were married on  Aug. 22, 1853, in Portchester, N.Y., officiated by a Presbyterian minister, according to research by Judith Adams, a descendant of his family. Hattie was 16 and John, 21.

Hattie was a daughter of Aaron and Harriett Edmond of Ridgefield (some members of the family spelled their name Edmond but most chose Edmonds — and a few appeared as Edmunds). Apparently John, Hattie  and her parents all shared an interest in the West — western New York, that is, an area that had been opening up to farming development after the Revolution. By 1855, John and Hattie, and their baby daughter, Emma, were living near the Finger Lakes, at Benton, N.Y., with her parents and other family members

But Benton was not west enough. By 1860 John was teaching school in Ada, Mich., just east of Grand Rapids.

When the Civil War broke out, Edmonds was quick to respond. Despite having a wife and two young children and being 29 years old, he enlisted  in the 2nd Regiment of Michigan Cavalry Volunteers at Grand Rapids in September 1861, signing up to serve three years.

By January 1862, he was stationed at the Benton Barracks in Saint Louis, Mo., when the
accident that helped doom him occurred. Something spooked the horse he was riding, and it took off, out of control. The horse ran past a shed, from which roof boards were projecting. Edmonds collided with the boards, which hit him in the lower ribs of his right side, and he was thrown from the horse.

The injury was so severe, Edmonds was unable to return to active service and was honorably discharged from the army in May 1862. He returned to his family, who were living in Grand Rapids, and according to medical records, was unable to work more than a few days at a time.

Since teaching was a rather taxing job, Edmonds apparently decided to take up law as a profession since he could more easily coordinate his workload to his physical disabilities. He began law schooling in Grand Rapids and became a lawyer. 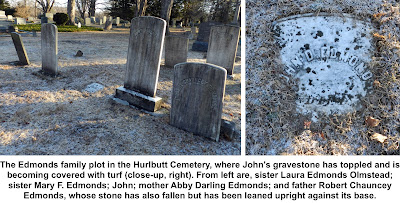 Meanwhile, his brief service made him and his family eligible for an army disability pension that provided money off and on for a half century — long after he had died.. But to obtain veterans disability payments, he and especially his widow, Hattie, went through what must have been tiring application procedures several times over. Just surviving records reveal more than 50 pages of submissions and correspondence,  including testimony from doctors on the nature of his injury, his disability, and his death as well as evidence of his marriage and his children.

Even a character reference was provided.  Said one physician who backed up his claim,  “Mr. Edmonds is an entirely upright and reliable man of good habits and I know nothing to invalidate his claim.”

Soon after returning to civilian life, John Edmonds began applying for the  pension. In 1863,  Dr. E.R. Ellis examined him and rated him two thirds incapacitated. “Applicant complains of severe pain in his right side over the region of the short ribs ... which at times, especially on exposure or over exercise becomes greatly aggravated,” the physician said.

However, his health continued to deteriorate. He and probably also his family, by then including two boys and a girl, moved back to Ridgefield, probably to live with his parents. On July 23, 1865, he died of what Ridgefield physician Nehemiah Perry determined to be “consumption” — what we now call tuberculosis. He was only 33 years old and is buried with his parents in the Hurbutt section of the Ridgefield Cemetery on North Salem Road.

Subsequent documentation described the disease as “contracted while in the service.”

After his death Hattie began applying to take over his benefits, and a year or so later, started receiving $8 a month in “widow’s relief,”  an amount increased after another  year to $14 apparently to include support for the three children whose existence had required additional documentation. 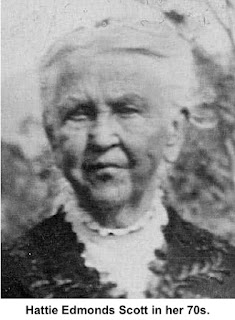 However, when she married Charles P. Scott in 1870, Hattie lost her pension. Nonetheless, the children — all still minors — remained eligible, but apparently Hattie had to reapply to keep those modest support payments coming to her new name, Hattie E. Scott. As each child reached 21, the benefit for him or her stopped and by the early 1880s, the family was no longer receiving any military pension payments.

All that later changed many years later. Charles Scott died in 1911, leaving Hattie a widow for the second time. Apparently it was six years before she realized that, as an unmarried widow of a Civil War-disabled soldier, she was once again eligible for John’s pension payment.

In 1917 at the age of 80 and living in Loveland, Colo., Hattie again began a tedious process of applying for a pension, including digging up half-century-old records and testimony.

Hattie Edmonds Scott collected that $8 a month or $96 a year until her death in 1923 at the home of her son, Lynn Edmonds, in Loveland. She was 87 years old. The local newspaper described Hattie as a “pioneer” of Larimer County, Colo, “having come to the county in 1871” and noting that her husband had  “at one time been county clerk.”

Her first husband and Lynn’s father, Civil War veteran John Edmonds, who had died 52 years earlier, was not even mentioned.