The plaque outside the library at Veterans Park School reads: “An innate compassion and deep understanding of human beings, coupled with a keen mind and fine administrative talents, make her an outstanding personality.”

The plaque honors Isabel M. O’Shea, the first principal of Veterans Park School. The school’s library is named for her; so is the auditorium of East Ridge Middle School, a building she helped to design.

Isabel Margaret O’Shea was born in Ridgefield in 1905, daughter of a popular chauffeur. After graduating from Ridgefield’s Hamilton High School in 1923, she studied education in normal school and two years later became a teacher at the old Benjamin Franklin Grammar School (which soon became the East Ridge School and then Ridgefield High School). Both she and her sister Elizabeth (Mrs. Harvey Lown) were teachers. Both women, said historian Dick Venus, “were the old-fashioned type of teacher who insisted on getting some knowledge into the heads of even the poorest students.” 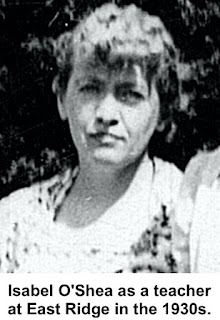 Isabel O’Shea was named principal of the town’s elementary level in 1944, when those grades were housed both at the East Ridge School and at the Garden School on Bailey Avenue.

When Veterans Park opened in 1955, she became its principal, serving till her retirement in 1960.

Though O’Shea left her job with the schools, she didn’t leave community service. In 1961, she became a member of the building committee that erected Farmingville School and then served on the East Ridge Junior High’s building committee.

She was chairman of a town study committee on recreation needs, and was active in the District Nursing Association, now the RVNA. In 1960, she was named Rotary Club Citizen of the Year, the first woman so honored. Rotarians noted that O’Shea was chosen for “contributing a great deal to the educational system and devoting to it more hours and actual labor than her duties called for.”

In 1965, the year she died, the Veterans Park library was dedicated to her. When the school was built, the space devoted to the library turned out considerably smaller than what O’Shea had requested. In the years that followed, she pressed administrators to enlarge the library, which was finally accomplished a short time before her death. 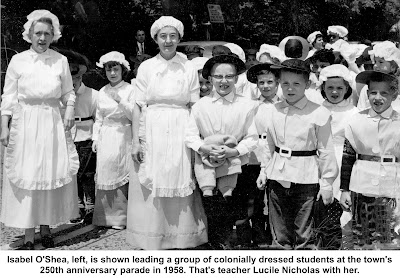 The bronze plaque outside the library notes that “she devoted her life to the community, its people, to her family and to her God,” adding that, through the dedication of the library to her, “It is hoped that her devotion to education will thus be remembered and serve as a constant inspiration to all people who visit this library.”

Both the plaque and an artist’s portrait commissioned by former student Louis Ridolfi would help keep her memory alive, said George Stromberg, her successor as principal of Veterans Park.

“To forget her and to permit her memory to fade into oblivion would be unthinkable,” Stromberg said. “Her life has touched all of us in one form or another. Future generations should be made aware of her interest in their welfare.”