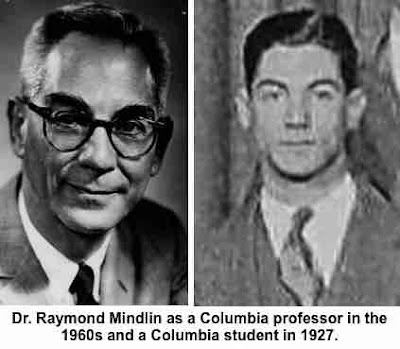 It’s not everyone who earns a national award presented by a president of the United States, but Dr. Raymond Mindlin did that and more: He received two awards from two different presidents.

While his honors came in realms few know about and even fewer understand, the results of his work are everywhere. For instance, the electronic watch on your wrist keeps accurate time because of its high-frequency, quartz crystal oscillator whose operation is based on equations that Mindlin “cooked up” around 1951.

A mathematical theorist and researcher, he was considered a world leader in his field, which he described succinctly in a 1980 interview: “I devise mathematical equations to describe and explain mechanical and electro-mechanical phenomena.”

His work over five decades helped the Allies win World War II, and led to the development of core components in not just electronic watches, but also televisions, radios and cell phones. His work even helped devise packaging materials with the best cushioning abilities.

Raymond David Mindlin was born in New York City in 1906 and earned two bachelor’s degrees and a doctorate at Columbia University, where he taught in the engineering school from 1932 until his retirement in 1975.

During World War II, he left Columbia for three years  to work on naval ordnance at the government’s Applied Physics Laboratory in Silver Spring, Md. There he contributed significantly to the development of the radio proximity fuze, which causes a shell or missile to explode when it is near the target instead of having to hit the target directly, greatly increasing its effectiveness.  The fuze has been called one of the most important technological innovations of World War II, and for his work on it, President Harry S Truman awarded Mindlin the Presidential Medal of Merit in 1946.

Over the years Mindlin researched and taught in such esoteric areas as photoelasticity, fictional contact and granular media,  waves and vibrations in isotropic and anisotropic plates,  wave propagation in rods and cylinders, and crystal lattice theories.

At his retirement in 1975, some 200 people attended a Columbia testimonial dinner at which Professor Jewell M. Garrelts, former associate dean of the Columbia engineering school, called Mindlin “an outstanding scientist whose clear, concise lectures were those of a master.” Garrelts noted that Mindlin was recognized internationally as “a pioneer in extending the mathematical theory of elasticity to bordering areas of electrical, thermal, optical, and acoustical phenomena.” Among the attendees was Mindlin’s first doctoral student, a man who went on to become head of the school of engineering at the University of Illinois.

Just before his retirement, a book documented his accomplishments.  R.D. Mindlin and Applied Mechanics, published by Pergamon, consists of eight chapters written by eight of his former students describing his major contributions to science.

Over the years he received countless awards, including, in 1980, the National Medal of Science, presented by President Jimmy Carter. The most lasting honor came after his death: The Raymond D. Mindlin Medal is today awarded by the American Society of Civil Engineers for outstanding research contributions in applied solid mechanics. 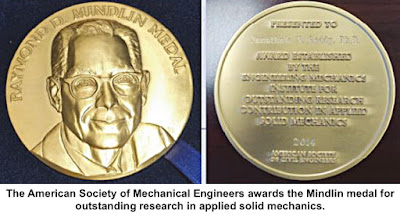 In the 1980 interview with The Ridgefield Press, Mindlin joked about the estimated    100 million electronic quartz crystals that were then being manufactured each year based on his formulas. “Unfortunately, I don’t get any money for it — you can’t patent a mathematical equation,” he said. “If I had a tenth of a cent for each one, I could support the school system of Ridgefield.”

But neither money nor notoriety motivated Mindlin’s research. “I do it for the fun of it,” he told the Press interviewer.

Ray Mindlin was also well-liked. “His professional colleagues treated him with deference at times bordering on awe,” said a fellow professor at the time of his death. “He was secure in the knowledge of his own worth, but wore the mantle of his eminence with genuine modesty. He was generous in giving or sharing credit, and unfailingly courteous to peers seeking his opinion or advice.

“Basically a shy, reserved person, he was, invariably and unexceptionally, the consummate gentleman.”