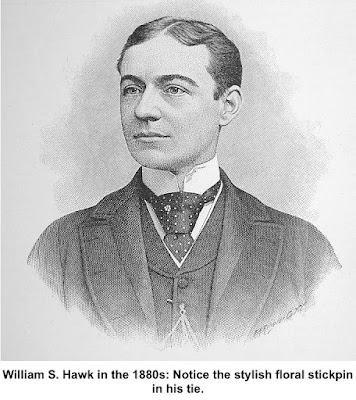 A Hotelier and His Nest

William S. Hawk built one of Ridgefield’s grandest estates as well as the world’s tallest hotel. Both are now gone, but in Ridgefield at least, relics remain as a reminder of a man who loved music, helped create an orchestra and, more lastingly, a venue for music to be heard in. With his friend Andrew Carnegie, he helped build and operate Carnegie Hall.

William Samuel Hawk was born in Ohio in 1859 and, after leaving a prep school in Massachusetts, went to work for his uncle,  who owned the St. Nicholas Hotel in New York City. He joined the management of the Windsor Hotel in the late 1800s. 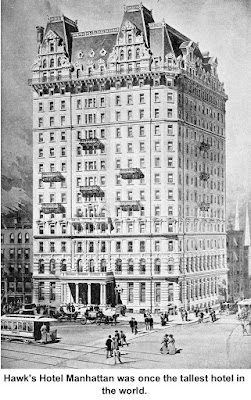 In 1899 he built and operated the Hotel Manhattan, then the tallest hotel in the world and among the premiere hotels in the city — it provided accommodations for both Presidents Theodore Roosevent and William McKinley. (The hotel, near Grand Central Terminal, was razed in 1961 to make way for an office building.)

Hawk became friends with President McKinley and was in Buffalo with the president the day he was assassinated in 1901.

In the 1890s, Hawk and his wife Edith decided they wanted a house in the country and acquired 14 acres between Branchville and Rockwell Roads to build “Hawk’s Nest,” a spreading, many-angled mansion on a hilltop. 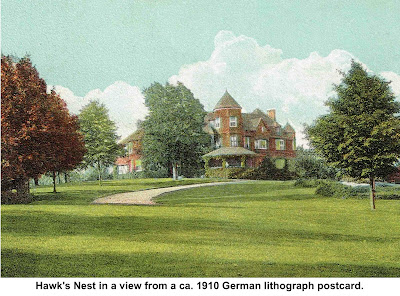 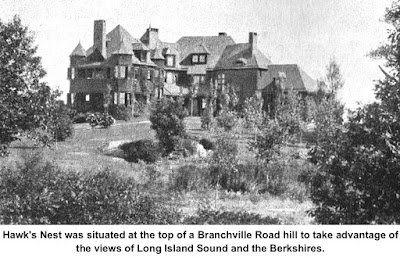 The Hawks had been fairly active participants in the community, supporting the improvement of schools and the library. Edith Hawk was a supporter of the town’s first kindergarten and both she and her husband contributed the money to build the sidewalks around the new Ridgefield Library at the turn of the century.

The 1914 advertisement was placed because the Hawks apparently wanted to focus on their life in Manhattan. William retired two years later. The estate did not fare well and had been vacant a couple of years when it caught fire in October 1921 and burned to the ground. The spectacular daytime blaze could be seen for miles around and was viewed with excitement by hundreds of Ridgefield students at the nearby Benjamin Franklin Grammar School and Hamilton High School. 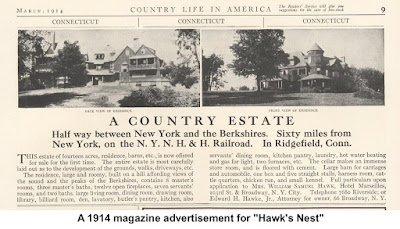 Today, stone walls and some parts of at least one modern house remain as reminders of Hawk’s Nest. So does the carriage house which years ago was converted into a residence called the Coach House at 80 Branchville Road. Over the years the Coach House has been home to a number of celebrities in the arts, including dancer Marthe Krueger (1942-1951), tap dancer Paul Draper (1949-50), Chinese art collector Abel Bahr (1951-59), and Broadway singer and actor Don McKay. 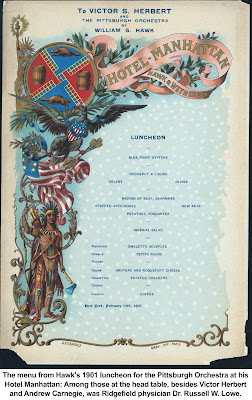 That would have probably pleased William Hawk, who was closely associated with the music circles in New York City. With industrialist Andrew Carnegie in 1891, he helped build Carnegie Hall as a venue for the New York Symphony Orchestra, of which Hawk had been a founder in 1878. (The symphony eventually merged with its longtime rival, the older New York Philharmonic.)

At a luncheon he hosted in 1901 at his hotel for the visiting Pittsburgh Orchestra, its director Victor Herbert, and chief benefactor Andrew Carnegie, Hawk recalled one of his first meetings with Carnegie. “I expected to find him steeped in business, for it was a time of keen business tension,” he said. “Instead I found him at his home discussing paleontology with one man and with another the selection of a good oboe for an orchestra.”