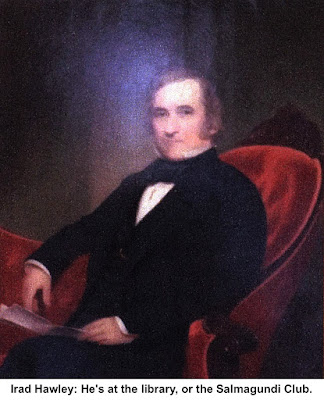 Irad Hawley:
His Name and Face Live On

A son of a Ridgefield deacon and great grandson of the town’s first minister, Irad Hawley made a fortune in food, coal and railroads, but he left his mark on the world in two rather different ways: The home of one of America’s leading art centers, and the name of a small Pennsylvania town.

And you can see his face, hanging on the wall, whenever you visit the Ridgefield Library — or the Salmagundi Club.

Born in Ridgefield in 1793, Irad Hawley was a great grandson of the Rev. Thomas Hauley, the first minister and the first school teacher in the town. The minister’s home  at the north corner of Main Street and Branchville Road is the oldest house in Ridgefield and is where Irad was born. It remained in the Hawley family for more than two centuries. 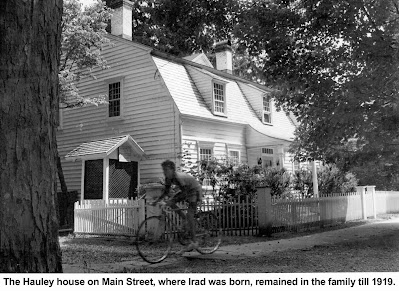 His father, Deacon Elisha Hawley,  was a leader in the First Congregational Church. His mother, Charity Hawley was active in the community, so much so that when he was preparing his autobiography, Recollections of A Lifetime, in the 1850s, Samuel G. Goodrich (“Peter Parley”)  interviewed her to refresh his memory about the town during his childhood (and he included a long profile of the Deacon in his book). She died in 1860, five months short of her 100th birthday.

In 1807 when he was only 14 years old, Irad moved to New York to begin a career in retailing. He took a break to join the New York Militia’s 11th Regiment, serving in the War of 1812 as a private. He remained a reserve member of the militia until his death, by which time he’d reached the rank of major.

After the war he established a grocery firm called Holmes, Hawley & Company, which grew into “a prosperous house in the West India trade for more than 25 years,” said the New York Observer, a 19th Century newspaper. He married his partner’s daughter, Sarah Holmes, in 1819.

But his interests — and income — soon expanded. He helped organize the Pennsylvania Coal Company, and served as its first president. Many of that company’s operations were in Poconos.  There, Irad established the town of Hawley in 1827 at the important junction of a coal-carrying “gravity railroad” and the Delaware & Hudson Canal, which transported the anthracite from there to the Hudson River and on to New York City. 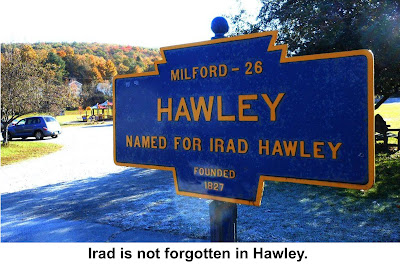 However, he also invested heavily in the “new technology” of railroads, becoming a director of the Boston & Providence and the Chicago & Rock Island Railroads.

By 1841, he could retire from Holmes & Hawley with what one historian called “an ample fortune.”

The canal, railroads, coal company, and his own business have come and gone, but Hawley’s next big project proved quite lasting, and still stands today.

“In 1852 construction was begun on Hawley's imposing brownstone-fronted house at No. 47 Fifth Avenue between 11th and 12th Streets,” reports Manhattan historian Tom Miller.  “At nearly 40-feet wide, it engulfed two building plots.  Completed the following year, the house was an aristocratic expression of the Italianate style. Inside, the mansion was the epitome of current domestic fashion.  Elegant carved mantels adorned the main rooms, and the dining room was decorated in the Gothic Revival style.”

It is today a New York City Landmark and on the National Register of Historic Places.

Hawley became interested in education.  He was a director of the Rutgers Female Institute, the first New York City college for women, and in 1858 headed a group of citizens “in opposition to the expulsion of the Bible from our Public Schools” — not surprising for the son of a deacon and great grandson of a preacher.

By the early 1860s, Hawley was having health problems. In 1862, he sailed to Europe to try to regain his health. (His 1862 passport application, in the days before passports had

Hawley wound up staying in Italy where, in 1865, he contracted typhoid fever and died in Rome. He left an estate valued at $500,000 — equal to about $8.5 million today — to his wife, Sarah, and five surviving children.

Some of that was real estate in Ridgefield and his sons, detecting the likelihood that the town would become more attractive to city dwellers once the railroad arrived in 1870, invested rather heavily in more village land — eventually owning most of what became the Lounsbury estate and Veterans Park as well as considerable acreage on lower High Ridge. 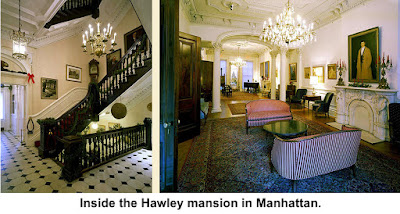 However, one son — Elisha Judson Hawley — proved a disaster for the family. Judson, as he was called, was caught in 1871, stealing more than $237,000 ($4.8 million) from family investments to cover personal business interests. The result was years of financial stress, battling among family members and even a  lawsuit as the Hawleys struggled to make up for the losses.  The New York Sun reported that the widow Sarah Hawley had “agreed to take a much less income than she was entitled to so as to help make up the deficit.”

Judson Hawley was never arrested or prosecuted. He died in 1915 in England, leaving an estate valued at only $200,000 in today’s dollars — less than a 20th of what he had stolen years earlier, reports Ridgefield village historian David Daubenspeck.

Irad’s estate wasn’t finally settled until 1919 when the last Ridgefield property — the Hauley Homestead where he was born — was sold.

Sarah remained in the Fifth Avenue mansion with two of her grown sons, Daniel Edwin and Elisha Judson, along with Judson’s wife, Anna. After Sarah died in 1891, the house was sold at auction to a Pittsburgh steel magnate.

Today, portraits of both Ira and Mary are displayed in those hallowed Salmagundi chambers the couple once called home.

Duplicates hang in the Ruggles Fine Arts Reading Room of the Ridgefield Library.