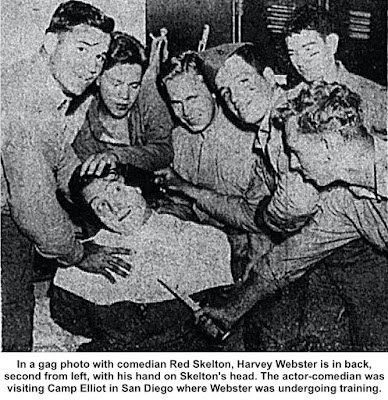 Harvey J. Webster:
Lost in the Bitterest Battle
November 1944 was a nightmarish month for Richard and Isabelle Webster of West Lane. On Nov. 8, they received news that their son, Sgt. George Webster, had been seriously wounded in France. A few days later, word came that another son, Harvey, had been blown up Sept. 15 in an amphibious tank involved in the invasion of Peleliu Island in the Pacific.
Private Harvey James Webster was only 19 years old when he died.
A native of South Salem, N.Y., Webster was born in 1925 and moved to Ridgefield with his family in 1941. He left school at 17 to join the Marine Corps.
According to one of Webster’s fellow Marines who took part in the same landing, Webster and the rest of the crew in the tank off the shore of the island were lost when a Japanese bomb scored a direct hit.
“He wrote that he was a sad witness to the sinking of the tank,” The Ridgefield Press said in early 1945. It was then that Mr. and Mrs. Webster received news that their late son 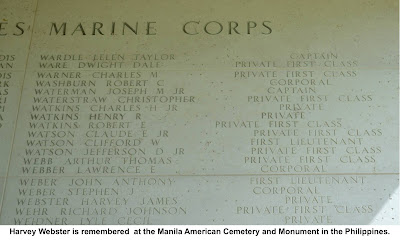 had been awarded a Purple Heart.

Their son’s remains were never found.
The battle was one of the bloodiest of the war. The 1st Marines suffered over 6,500 casualties during one month of fighting, more than a third of their entire division. The infantry had another 3,300 casualties. The casualty rate was higher than in any amphibious operation during the Pacific War and has been called “the bitterest battle of the war for the 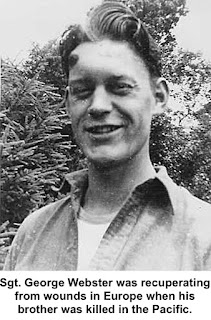 Marines” by the National Museum of the Marine Corps.

“A touching bit of irony was the return of 15 letters written to Harvey from his family, which had not reached him, together with Christmas presents mailed to him,” The Press reported. “Harvey was moving too fast  to receive his mail and the last letters from him begged for mail from home.”
At about the same time, a second Purple Heart award arrived at the Webster home for their son, George, for the wounds he received on the German-French front. George was still recuperating  in late January, months after he was wounded.
Meanwhile, a third son, Charles R. Webster, was in Army training at Fort Knox, Kentucky.
George and Charles Webster survived the war — George died in California in 1996 and Charles in Danbury in 1972.
Their mother, the former Isabelle Hawley of Redding, died in 1949. Their father, Richard, committed suicide in Danbury in 1970 at the age of 76.