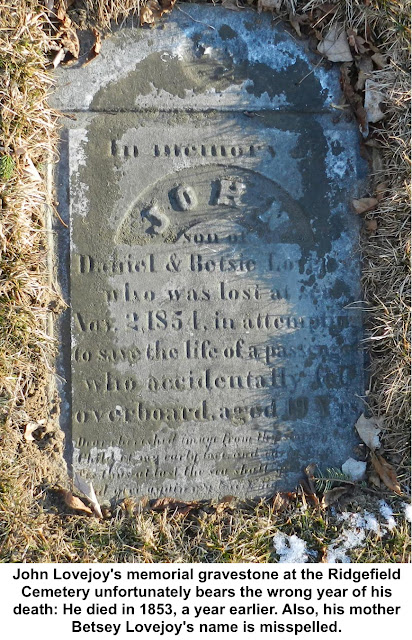 John Lovejoy:
A Forgotten Hero
In a time when many unsung acts of heroism are taking place daily throughout the land,  it’s perhaps fitting for Old Ridgefield to remember an unsung hero of the past. John Lovejoy’s effort to save another man’s life 167 years ago has long been forgotten, and probably wasn’t even much known in 1853 when the 19-year-old gave up his life.
Lovejoy was born in Ridgefield in 1834, a son of Daniel and Betsey Lovejoy. His father Daniel was a native of Chatham, N.Y., up near Albany, but Betsey was a daughter of the prominent Ridgefield tanner and miller, Jabez Mix Gilbert. Daniel and Betsey were married in Ridgefield in 1828 by the Rev. John Lovejoy, Daniel’s father and undoubtedly the namesake for our John. Rev. Lovejoy was an itinerant Methodist minister who preached in eastern New York and western Connecticut.
Daniel was a currier, an artisan who dresses, finishes and colors tanned leather to make it strong, flexible, attractive, and waterproof. He no doubt worked for his father-in-law — he lived next door to the Gilberts in the Titicus neighborhood just north of the village.
Son John Lovejoy apparently had no love of leather. The Gilbert tannery at Titicus was probably a rather dark, dank, and smelly place to work. Instead John felt a call to the sea. When he was still a teenager, he left home and soon joined the crew of Advantage, a large ship that plied the North Atlantic.
On the day John left home in 1852, his mother gave him a letter and a Bible. According to an 1854 article published in  Sailor’s Magazine, a trade publication of the era, Betsey Gilbert wrote the letter because her “heart was too full for utterance in any other way.”
In the letter “she reminded him of the instructions he had received from his earliest years,” the magazine said. She “entreated him to read and pray over the Bible she put in his hand; to touch not, taste not, handle not the inebriating cup, and avoid everything injurious to his character, and which would cause grief to her.”
The magazine felt that Lovejoy had followed his mother’s advice as well as “his own sense of right, and the teaching of the word of God. Consequently, he was everywhere respected and beloved.”
In March 1853, Lovejoy joined the crew of the ship Advance under Captain Arthur Child, a master with whom he had already been sailing for eight months. “I always found him an active and attentive young man, and very much esteemed by all on board,” Captain Child told Sailor’s Magazine. “If he had not been lost we should have made him 2nd mate the next voyage.”
The Advance must have been a sizable vessel; in the fall of 1853, it was on a trans-Atlantic crossing from Le Havre, France, to New York City, with 738 passengers on board.  On Nov. 2, about 800 miles west of Land’s End in Cornwall, one of those passengers fell overboard. Captain Child recorded what happened:
“On the morning of the 2d of November at 7:30 A.M. in Long.24 degrees West and Lat. 48 degrees North there was a cry of ‘A man is overboard’ when Lovejoy ran aft and jumped after him with the intention of rescuing him. We brought the ship to the wind, and got a boat out immediately; but it was of no avail. He was drowned before the boat could reach him.”
Sailor’s Magazine reported that later, “his mother’s letter was found, not on file with others, but carefully folded in his Bible.”
The death of John Lovejoy, and that of another son, Francis Mix Lovejoy three years earlier, may have led the elder Lovejoys to seek a new life. By 1860, they had left Ridgefield and were living on a farm in Derby. By 1880, the 72-year-old Daniel was working as a “bathhouse keeper” in New Haven. He and Betsey were living with their son, Frank Mix Lovejoy, a reporter for The New Haven Courier, along with Frank’s wife and his 21-year-old son, a  gun maker with the Winchester Repeating Arms Company.
Betsey died in 1886 at the age of 79. Daniel died ten years later, aged 90. They are buried in New Haven.