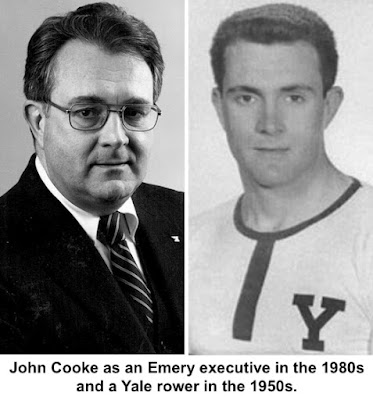 John P. Cooke:
Outspoken Olympian
John Cooke accomplished at least two things that no other Ridgefielder has: He won a gold medal in the Olympics and he was the only member of a third-party ever elected to local public office, at least in the 20th Century.
Cooke also led the committee that oversaw the construction and fine-tuning of the Ridgefield High School on North Salem Road.
John Patrick Cooke was born in Ansonia in 1937, starred at high school football, and entered Yale University where he expected to continue to play football. As part of efforts for footballers to stay in shape over the winter, he rowed in the tanks at the university’s gymnasium.
He fell in love with rowing. “I’m a short stocky fellow, not usually the type that rows,” he admitted in an 2001 interview.
Just 20 months later, he was rowing in the 1956 Olympic Games in Melbourne on what has been described as “the most successful U.S. rowing team ever to compete in the Olympics.” The team won two gold medals, three silver medals and a bronze.
Torrey Cooke, his wife, recalled meeting him for the first time at a wedding in Philadelphia. Though he was an Olympics medalist — and, later events would show, was interested in making an impression on her — he didn’t even mention the Olympics.
“Never said a word — he never bragged about it,”  she told The Press’s Macklin Reid. “Somebody else said, ‘Do you know that guy has an Olympic gold medal?’”
He rowed in an eight-man shell. “He was the number three man, and that’s usually the steam engine,” Mrs. Cooke said. “He was a powerhouse. He was a terribly strong young man.”
He went on to coach at Yale and stayed active in rowing throughout his life, refereeing, judging, and being involved in various rowing associations. He was a referee for the Head of the Charles race in Boston for 20 years, and officiated at many other competitions in the eastern United States.
In 2001 he earned the United States Rowing Association’s Jack Kelly Award for “superior achievements in rowing, service to amateur athletics, and success in their chosen profession, thereby serving as an inspiration to American rowers.”
As a sign of his love of the sport, Cooke hung a rowing shell — more than 20 feet long — from his living room ceiling.
After graduating from Yale in 1959  with a bachelor’s degree in industrial 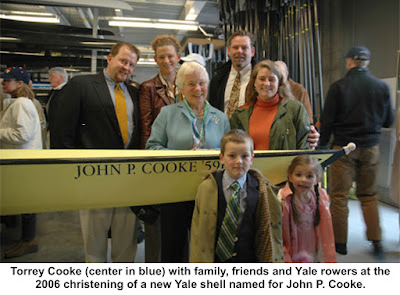 administration, Cooke enlisted in the Marine Corps and was commissioned a second lieutenant  in 1960. Two years later, he planned the loading and initial combat array for a secret mission — the 1962 invasion of Thailand — that was one of the early involvements of U.S. troops in what became the Vietnam War.

Later on,  he helped found the detachment of the Marine Corps League in Ridgefield.
During a 28-year career with Emery Air Freight, he oversaw the construction of buildings all over the world, including Emery’s “hub” in Dayton, Ohio, a project that occupied him for seven years.
His expertise in construction proved useful to Ridgefield  in 1967 when he became chairman of the Ridgefield High School Building Committee.
“We completed the new high school on time and under budget, the only school in Ridgefield that was under budget,” he said.
A resident since 1965, Cooke had been outspoken on many issues over the years. He was a pioneer member of the Independent Party and in 1993, was elected to the Zoning Board of Appeals on the Independent ticket — and continued to serve on the board until a year before his death.
In 1995, he ran for first selectman as an Independent because “I’ve become disenchanted and upset, like many other people, with the self-appointed, elitist group which runs the town.” Though he came in third behind Sue Manning and Barbara Manners, he collected a respectable 1,578 votes.
He died of cancer in 2005.
John Cooke’s causes over the years included outspoken opposition to a variety of government endeavors including the Super 7 expressway,  the building of an elaborate visitor’s center at the Weir Farm National Historic Site, and what he felt in later life had become excessive school construction in town.
“It never scared him to get up and say his piece at a town meeting,” Torrey Cooke said. “He said, ‘You know, when you believe in what you’re talking about, it doesn’t bother you.’ He was encouraging to me, always, to be able to do that.”