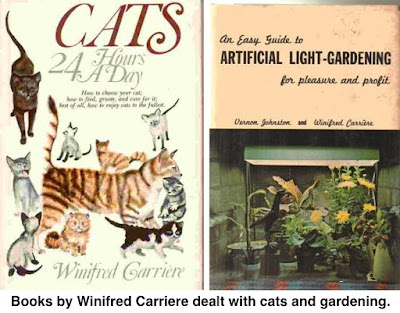 Winifred Carriere:
Quotable on Cats
When it came to cats, Winifred Carriere was quite quotable. Just Google her name and you’ll find scores of websites recalling her observations. Probably her most repeated pronouncement is: “Cats always know whether people like or dislike them. They do not always care enough to do anything about it.”
Carriere loved cats, enough to write a book, Cats, 24 Hours A Day, published in 1967 and again in 1975. “There is no doubt that Winifred Carriere is ‘possessed’ by her cats,” said Kirkus Reviews,  “and for 20 years she has been happily ‘without a catless moment.’”
However, her interests extended beyond the feline to the floral.
Winifred Osborn Carriere was born in Ridgefield on April 20, 1912,  the daughter of Richard C. Osborn and Beulah Sanford. Her father, who worked for the family-owned lumber yard that is now Ridgefield Supply, died when she was seven  Her mother went off to Manhattan to become a nurse, married one of her Columbia University professors named Harry Clinton France,  and eventually became a leading authority on child care. She wrote articles for more than 100 magazines, was editorial director of American Baby magazine, appeared often on TV, and wrote two books, How to Have a Happy Child (1952) and How to Have a Happy, Healthy Baby (1964).
Young Winifred stayed in Ridgefield with her great-aunts, Annie Tallman Osborn and Carolyn Winifred Osborn, at the Osborn homestead at Main and Prospect Streets.
She graduated from Syracuse University, where she met and married Albert Carriere, an aspiring playwright and actor. They had a daughter and were later divorced.
After the divorce she moved to New York City, and began a career in editing. She worked 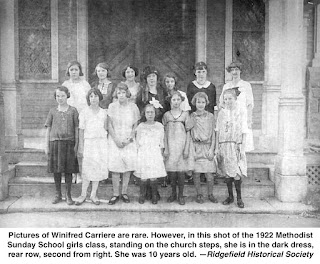 at Prentice Hall, McGraw-Hill and the Institute of Radio Engineers before turning to magazines. For many years she published and edited Professional Florist Magazine, a trade magazine.
Her interest in flowers led her to join with Vernon Johnson in 1964 in writing An Easy Guide to Artificial Light Gardening for Pleasure and Profit. A New York Times reviewer with a sense of the pun said the book “provides illuminating answers to questions about equipment, construction and care of light-gardens.”
She retired to a house on Wooster Street in the 1960s and 1970s,  working for a while as office manager for Buck Argenio’s Buck Realty. She died in an assisted care home in Sharon in 2002 at the age of 90.
While flowers were her profession for many years, it is cats that keep Win Carriere’s name alive today. Other of her observations that are often quoted include:
at August 31, 2020