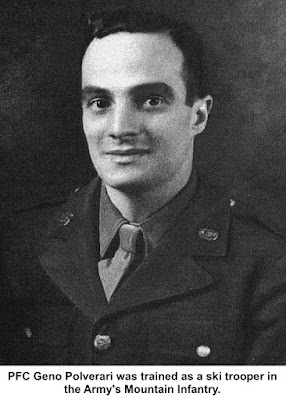 Geno Polverari:
His Smile and His Sacrifice
On March 9, 1945, Private First Class Geno Polverari wrote to his wife, Marguerite, from Europe, saying that he was doing fine. Four days later, he was dead, the result of wounds suffered in combat in northern Italy.
He was one of three members of Ridgefield’s Italian-American community to sacrifice their lives in World War II.
Geno Joseph Polverari was born in Ridgefield in 1916 to Michael and Maria Polverari, immigrants from Italy. His mother died when he was two years old. As a teenager, to help support the family, Geno went to work for James “Jimmy Joe” Joseph at his well-known Joe’s Store at Main Street and Danbury Road.
Aldo Biagiotti remembered Polverari as a clerk at Joe’s Store. “One day mother brought my brother Fabio (“Fibber”) and me into Joe’s Store to purchase some groceries,” Biagiotti wrote in his book, Impact: The Historical Account of the Italian Immigrants of Ridgefield, Connecticut. “Naturally, we both made mother aware that we wanted an ice cream.
“Geno Polverari, the clerk, came over and waited upon mother. My vivid recollection of Geno is his smile. He had a warm, friendly smile on his face at all times.
“Although it was during the depths of the Depression and our family could hardly afford the luxury of spending money on ice cream, mother ordered two vanilla cones.
“Geno Polverari was very generous in scooping out the vanilla ice cream that tottered on the top of each cone.”
Around this time, Polverari proposed to another Ridgefield native, Marguerite Mary Maddock, and the two were married in Katonah, N.Y., where Marguerite and her family were living. They soon had a son, John.
In 1943, Polverari was drafted into the U.S. Army and volunteered for the Ski Troops, joining the infantry’s 10th Mountain Division training at Camp Hale in Denver, Colo. By January 1945, he was in combat in Italy, the land of his roots. Two months later, he was 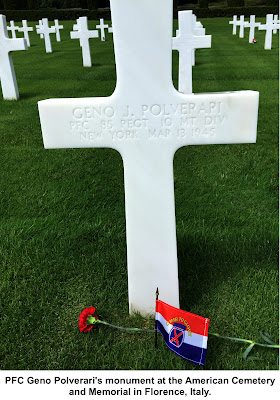 serving with a motor corps unit at Anzio, attacking the fleeing German troops in some of the war’s most bitter fighting.

He was wounded and died there March 13.
Geno Polverari is buried at the American Cemetery and Memorial at Florence, Italy. He posthumously received the Purple Heart.
In 1946, his widow, Marguerite, married  Willis A. “Pop” Goodrow, who was chief of the Bedford Hills Fire Department. They had two daughters and lived in Katonah and later in Mahopac, N.Y., where son John still lives. She died in 2004 at the age of 81.
While few people in Ridgefield today remember Geno Polverari, he has not been forgotten. In 2019, members of the American World War II Orphans Network honored him as a “Fallen Father,” placing a rose on his monument at the cemetery in Florence.