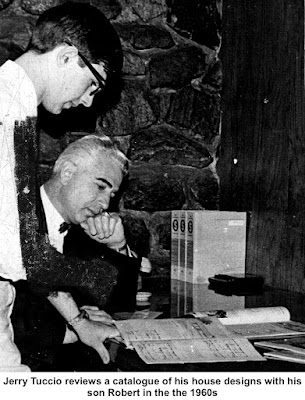 An immigrant mason’s son who had tried his hand at butchering meat and selling cars wound up developing more of the town than anyone in its history.

By his own estimation, Jerry Tuccio  built “about 1,200 houses” in Ridgefield.

“I’m very proud of each one,” the 85-year-old builder said in 2007, a few months before this death. “I put a lot of pride into every house. We used the best materials and had the best construction.”

Success did not come easily, he added.

“We came into Ridgefield with nothing,” he said. “I had no money when I started. Ridgefield Savings Bank gave me the world. They asked me to go with them for all my business and I agreed.”

Attilio “Jerry” Tuccio was born in 1920 in Compo, Calabria, in southern Italy. As a boy of about 10, he came to the United States with his family and grew up in Bedford Hills, N.Y., where his father was a mason.

During World War II, he served in the North African campaign with the 213th Army Anti-Aircraft Battalion, which fought German Field Marshal Erwin Rommel at the Battle of Kasserine Pass in February 1943.

Tuccio recalled going into action on Feb. 14 — Valentine’s Day. “I was never so scared,” he said. “I remember thinking I would work the rest of my life for nothing if I could come out of there with my life. I wasn’t the only one that said that. It was a sad day.”

After the war and back home, he tried working as a butcher and as a used-car salesman, “but construction was in his blood,” said Robert Tuccio, one of his two sons.

His first construction experience was helping his father.

“Pop could put up stucco with the best of them,” said Robert Tuccio. “He learned the mason trade from his dad,”

In the late 1950s and 1960s, the town’s boom years, houses seemed to sell as fast as they could be built — and  Tuccio honed the art of building them quickly.

“We would put houses in a cycle to be built,” son Robert recalled. “And that cycle was six weeks, from start to finish, from literally cutting the trees down on the lot to having a finished house ready to move into. There were 180 subs working — literally. Subcontractors like plumbers, electricians, they’d have crews that were on the job every single day and they’d literally go house to house as they were being built.”

In the larger developments, many of the house styles he built — with names like The Ridgefield, The Ridgebury, The Brewster, The Sherman — were 3,000 to 3,500 square feet, big houses for that time. And Tuccio dressed them up.

“He was proud of what he built. He tried to put as many features into a home as he could,” his son told The Ridgefield Press’s Macklin Reid. “He was an innovator in the sense the homes were being built with intercoms, central vacuum cleaners, the antenna systems were being put in.”

Many of his developments had recreation areas with swimming pools, tennis and basketball courts.

Over the years, disagreements with town zoning authorities arose — during his application for the Eleven Levels subdivision, Tuccio protested the two-acre zoning and maintained he was being unfairly denied his right to develop his land reasonably. At one point he uttered the declaration, much quoted at the time, “This is Ridgefield and not Russia!”

Looking back in 2007, Tuccio didn’t make much of the disputes with zoners. “I got along well with everyone,” he said. “There were never any big problems.”

He retired in 1970, at age 50.  Robert said his father estimated that he owned some 600 empty building lots around town at that time — many of the lots his brothers and sons would build on in the years that followed.

Tuccio and his wife Ernestine moved to Florida, first to Marco Island and then to Naples. He died in 2007 and is buried St. Mary’s Cemetery.

His family said Jerry Tuccio was a generous man.

“He helped people out whenever he thought they could be helped,” said Arthur Tuccio, one of his two brothers.

“He helped a lot of people along the way,” Robert Tuccio said. “I think helping people gave him a lot of enjoyment.”