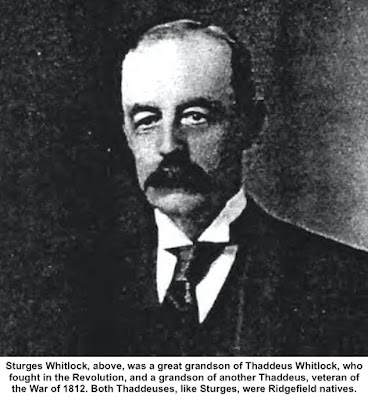 Sturges Whitlock:
Our Own Gutenberg
Ridgefield had its own Johannes Gutenberg, a man who invented a printing press that was so popular, his factory couldn’t keep up with the demand for it.
A fourth generation Ridgefielder, Sturges Selleck Whitlock was born in 1844 in the Bennett’s Farm section of town. His father, John, was a machinist and tinkerer, who taught his son the trade and apparently inspired  in him a desire to experiment.
Sturges grew up in Ridgefield, and probably attended the old Bennett’s Farm Schoolhouse.  As a young teenager, however, he studied at Jackson’s Academy, a private school that operated in the Turner House in Danbury (a hotel erected by retired circus owner Aaron Turner of Ridgefield).
“He proved an apt and industrious scholar and left school at the age of eighteen, the possessor of a liberal education,” said a Whitlock family history.
He joined his father’s machine shop in Derby, learning both the skills and the business. In 1868, his father retired and Sturges took over, operating the shop for 20 years.
Meanwhile, he was coming up with ideas about improving the speed and performance of printing presses used for books, magazines and newspapers — all of which 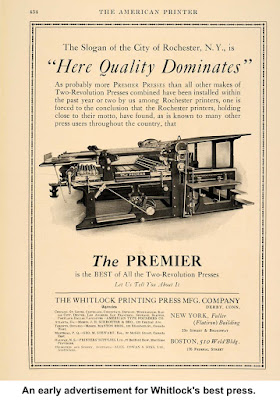 were becoming increasingly popular after the Civil War. By 1877, he patented a new printing press design and began manufacturing them.

The presses became so sought-after, his factory could not keep up with the demand. For the first 10 years, he could produce about 100 units annually, each selling for the equivalent of about $60,000 in today’s money.
It might be said that his interest in machinery carried over into his romantic life. In 1868, Whitlock married Mary Olive Singer, a daughter of Isaac Merritt Singer of New York. Isaac Singer was a fellow machinist and inventor who had founded what has been called America’s first multinational corporation, the Singer Sewing Machine Company.
In 1888, as the demand for Whitlock’s Premier model press continued to increase, he reorganized into the Whitlock Machine Company and moved to larger quarters in Shelton (a building still standing and being considered for status as a state historic site).
Whitlock did not stop improving his press, and his business grew to the point where “the press is now used in most all of the printing offices in the country,” said an 1899 profile.
A year later, Whitlock’s wife died and he turned over management to a business associate and began to spend more time on community and political interests. A Shelton 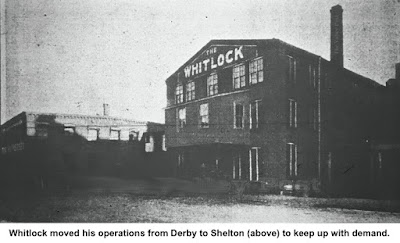 resident, he served both as a state representative and state senator, was on the Board of Trade in Shelton, was active in Masonic organizations, served on the local board of burgesses, and was a strong supporter of the Episcopal Church.

Meanwhile his company took on a new name, the Premier and Potter Printing Press Company, and operations expanded in the 1920s to include actually performing high-quality printing. At one point, the firm was printing currency and stamped postcards for the U.S. government (which required the presence of federal agents who delivered the paper and oversaw the entire process).
In 1936, however, the company closed, apparently a victim of the Depression as well as competition from more modern press equipment. Sturges Whitlock had died in 1914 at the age of 70. So, apparently, had the ingenuity that had once brought his company to the top of the printing press manufacturers in this country.
“Mr. Whitlock possessed a rather unusual union of characteristics which, when taken together, almost invariably spell success,” said his family history profile. “The capable business man and the inventor are rarely found together in one person, the qualities which make for ability in each line somewhat negativing the others. In his case, however, this was not so and he was equally capable of inventing his splendid press and successfully putting it upon the market.
“Nor was invention one effort merely, but he followed it up by much valuable work, making great improvements from year to year in his own device, and had eventually about twenty patents on these various supplementary inventions.”