Beauty and the bugs

In fields and wetlands throughout the Northeast, Galerucella calmariensis and its cousin, Galerucella pusilla, are chowing down, guests of federal and state governments.

These two European beetles were invited over to do battle with a beauty that botanists believe is a beast. The Purple Loosestrife, whose tall wands of richly colored flowers are so plentiful at this time of year, was imported more than a century ago to grace our gardens. Like many another newcomer, the plant found North America much to its liking, so much so it is now choking out native species and altering vast wetland habitats. 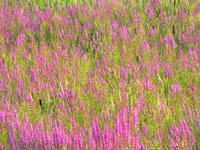 In Europe, Purple Loosestrife is naturally controlled by leaf-eating insects like Galerucella and probably by other plants that aren’t as easily overcome by its dense colonies. Scientists spent years studying the beetles and believe importing them will not harm any other species. Let’s hope they’re right – not everyone is convinced that introducing alien insects is wise. What’s more, beekeepers love loosestrife because of the nectar it provides at a fairly dry time of the floral year.

Odd, that a plant causing such a commotion bears a name that recalls its old use as a peacemaker.