In the 19th Century, farmers here grew many crops, but the most common grain – wheat – was generally not among them. This was probably because of the Hessian fly. 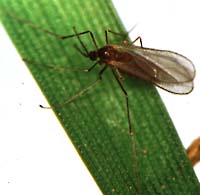 Hessian fly? Not your everyday bug of 21st Century suburbia, yet this mosquito-like insect had a major impact two centuries ago because its larvae sucked the life juices from wheat.

The insect, which first appeared on Long Island around 1779, is believed to have arrived with Hessian soldiers fighting in the Revolution – hence, the name.

Many farmers in the Northeast gave up the crop – despite the fact that no less a personage than George Washington urged them not to do so. Washington recommended growing yellow-bearded wheat, which was more resistant to the larvae.

Hessian fly is still around and now attacks wheat coast to coast. But fly-resistant wheat varieties have been developed and are so successful that insecticides are often not needed to combat this strange, living remnant of a war fought 225 years ago.