The sound is not cereal but the death knell of the 71 billion insects killed annually in ``bug zappers.'' 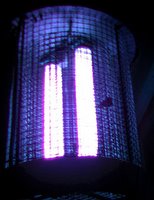 The fact is, however, that most insects killed in zappers are beneficial or, at the least, not harmful or even annoying. Many are food for wildlife such as birds and fish. Others, like ladybugs and tiny wasps, attack and control harmful insects. Still others, including moths, are flower pollinators.

The mosquitoes and biting flies that owners think they’re killing aren’t even attracted to the device’s ultraviolet light. One scientific study of the contents of bug zappers found that of 13,789 bodies, only 31 were biting insects. That’s less than one-quarter of one percent and an incredible waste of not only life, but electricity.

The irony, the researchers said, is that bug zappers destroy many of the insects that kill and control mosquitoes and flies.

Email ThisBlogThis!Share to TwitterShare to FacebookShare to Pinterest
Labels: insects