All that glitters may not be gold, but if you run across Metriona bicolor, you wouldn’t mind at all. At least, not if it’s an adult. 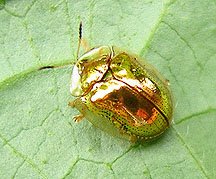 Like a drop of molten gold, the Golden Tortoise Beetle clings to and munches on the leaves of morning glories – or, on the wild side, the closely related bindweeds. The golden shell glows with iridescence. Put one in your hand, however, and watch the color change to mother of pearl, and then dull orange as the insect manipulates the moisture content in its shell.

Seen on a leaf, the lustrous beetle is hard to believe. Perhaps even more amazing is the fact that the beautiful adult sprang from a “filthy” kid. The black, fork-tailed larvae of the tortoise beetle camouflage themselves by collecting excrement, attaching it to their backs, and walking around under a load of, well, crap.

This tiny Jekyll and Hyde is yet another example of the wonders of nature right outside your back door.

Email ThisBlogThis!Share to TwitterShare to FacebookShare to Pinterest
Labels: insects