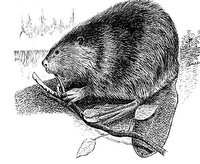 Pity the poor beaver. Although touted in countless film documentaries, the beaver’s industriousness is always getting the rodent into trouble.
To establish ponded homesteads, beavers kill trees to build dams. The dams often flood roads, lawns, septic systems, parking lots, basements, and other trappings of suburbia, angering the human neighbors.
It wasn’t always so. Driven from much of the East Coast by farmers who chopped down most of the trees, beavers had vanished in many areas by the 19th Century. With the return of woodlands in the 20th Century, various reintroduction efforts were successful – so successful in Connecticut that some 8,000 beaver live in that small state today.
Adult beavers have no natural enemies – except man. They are among the few creatures legally hunted with what are called “kill traps.” Amazingly, kill traps are the only legal way to catch them in Connecticut; it is illegal to live trap a beaver to relocate it. The official state explanation: There are so many beavers in Connecticut that moving them would only exacerbate problems elsewhere.
Being industrious and a movie star doesn’t always pay.