Where do birds go at night – especially in the winter?

When heading off to sleep, birds are looking for protection from two things: enemies and the elements. Because of this – and, of course, the fact that it’s dark out – people rarely see sleeping birds. 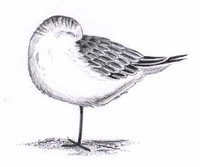 Diurnal birds – those active in the daytime – have various ways of spending the night. Many small songbirds simply find a branch in a convenient tree to protect themselves from wind, rain and snow. Some favor thick bushes and shrubs. Many like spruces, hemlocks and other evergreens whose needles provide a degree of year-round protection. Cavity dwellers, such as woodpeckers and wrens, may make use of holes in trees or among rocks or fallen trees.

Outside breeding season, many songbirds such as robins, bluebirds and even cardinals will gather in flocks and sleep together. Some birds, such as crows, vultures, and starlings, will roost in great numbers. Roosts provide protection in numbers as well as a modicum of heat generated by all the bodies being fairly close together.

Gull, ducks and geese will float on water at night, usually in groups, while some shorebirds will settle down for the night on a relatively remote beach or in grass at the edge of the shore.

Some birds, such as Common Redpolls, ptarmigans and Ruffed Grouse, will bury themselves in snow at night, taking advantage of its insulating quality. It was a technique emulated by North American Indians as they journeyed away from camp in winter.