An amazing thing about the Pussy Willow is its color – or more specifically, the lack of it. Few shades are duller than gray, yet the flowers of the Pussy Willow are among the most beloved of any spring bloom. 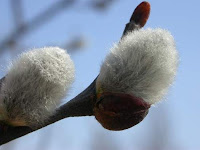 Therein lies its charm. This bush wins us with form, not flash. Its catkins are catlike, all cute and furry like the tail of a kitten, and they wrap themselves along the branches like so many fuzzy caterpillars marching to the sky.

It also wins us with timing, blooming with the first thaws of March. But for those in a hurry for signs of spring, snipping off a few bloomless branches and sticking them in water will net wands of premature catkins.

The wonders of the willow were known to Hippocrates in ancient Greece and to North American Indians. However, both were interested not in the flowers, but the bark, which produced a painkiller called salicin. This, in turn, led to the discovery of salicylic acid, and to synthesizing acetylsalicylic acid – what we call aspirin.

So, it seems that Pussy Willows can relieve a lot more than just the bleakness of winter.