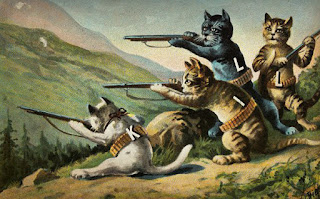 Few scenes are as peaceful and domestic as the family cat, curled up and purring in your lap, on a cool spring evening. But for uncountable millions of creatures, house cats are not so warm and fuzzy, and feline fangs are the last thing they see before they die.

Conservation officials say that of the 90 million pet cats in the U.S., only 35% are kept indoors. The rest are let loose to hunt, killing “hundreds of millions of birds, and more than a billion small mammals, such as rabbits, squirrels, and chipmunks each year,” says the Connecticut Department of Environmental Protection.

Habitat destruction is the leading cause of declining bird populations, but right up in second place are cats, both domestic and feral.

The killer is becoming the killed, however, as house cats are now prey themselves. Increasing numbers of coyotes and now fishers – a large carnivorous marten that has been reintroduced into our woods – are catching and eating many house cats.

The answer to both deadly problems is simple: Keep kitty indoors.

I recently saw a fisher here in Portland.-I have a cat but keep it indoors.