Behold the beetle, perhaps the most successful of all life forms. One in every five species on Earth – including plants – is a kind of beetle. More than 24,000 different beetles live in North America alone. 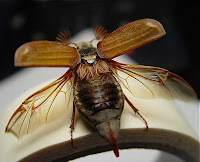 Many are well-known. In July, for instance, we find lady bugs, fireflies, and – despite their name – June bugs. Most share a common trait: Their first pair of wings has hardened into plates that provide protection. When the beetle needs to fly, these plates, called elytra, are raised to unveil the flight wings.

Most beetles are harmless. Some are pests, however, and a few annoy in odd ways.

Take the Death-watch Beetle, which bores its way into wood, including furniture. To communicate, males and females rap their heads against the tunnel walls, producing a clicking sound. To folks generations ago, clicking furniture meant a death in the family was imminent.

Then there is the Drugstore Beetle. “Virtually nothing organic is off-limits to this insect, including leather, flour, dried beans, and cayenne pepper,” write Eric Eaton and Kenn Kaufman in the Kaufman Field Guild to Insects of North America. “It will even bore through plastic vials to get to a meal.”

Or how about the Cigarette Beetle, which loves dried vegetable matter, but is especially fond of tobacco. It favors chewing, though. “So far, it has not been observed smoking,” report Eaton and Kaufman.