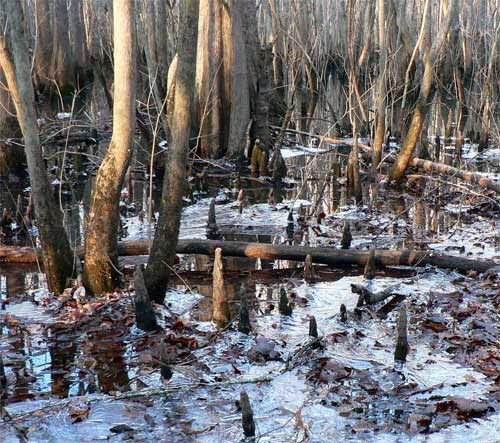 As winter thaws out of the ground and opens the waters of our swamps, a characteristic sour scent appears. It tickles our noses with a strong smell that is far from perfume, but still has a strange attraction.


We are probably smelling a soup of scents.

Anaerobic bacteria, the kind that thrive in water and soil with little or no oxygen, give off hydrogen sulfide and phosphine gases as they feed on the products of decomposing leaves, grasses and other vegetation from the previous seasons’ plants. Those gases combine with others offered by freshly thawed, but decaying vegetation. Add to the mix the malodorous Skunk Cabbage, and you have a special blend of wetland aromas that can be found only in early spring.

This pungent and pleasant scent signals renewal in these hotbeds of life. Swamps are where the new season really begins, a nursery full of not only stinky bacteria, but countless aquatic and land insects, small fish, amphibians, reptiles, mollusks, as well as wildflowers, that serve as food for other wildlife emerging from dens or arriving by wing.

And so, though it arises from death, this sour scent is really a sign of life.
amphibians spring swamps wetlands wildflowers