The season of nesting is a good time to take a look at the kinds of male-female relationships that exist in the bird world. Many birds form lifetime partnerships – though they may have quick “flings” on the side – while others mate for only short periods or have multiple mates.

Ornithologists describe three kinds of mating arrangements: monogamous, polygamous and promiscuous. In monogamous pair bonds, the birds mate for at least the breeding season, raising their young together. Ornithologist David Lack estimated that at least 90% of nest-raised birds come from monogamous pairs. So do 80% of precocial birds – those able to walk about and feed themselves shortly after birth. 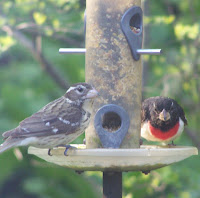 In many, perhaps most cases, monogamous pairs remain mated until one of them dies. Canada Geese are among the most faithful birds, mating for as long as 20 years. Most gulls also pair for life. The Rose-breasted Grosbeaks at the left are monogamous. This system is the most efficient and effective, providing the best protection and service for the brood of nestlings.

Some birds, such as House Wrens, generally stay with one mate for only one brood. In fact, while the male is raising the first brood, the female may take off, find a new mate, and begin a second nest. Talk about energy!

In the case of polygamous pair bonds, one male or one female may have several mates. In the more common arrangement, like the harems of lore, one male has several females. This is called polygyny. Wild Turkeys, Ring-necked pheasants, grouse, Bobolinks, and Red-winged Blackbirds are polygynous. The male generally sticks with and protects his several wives and their offspring while each female takes care of raising the children. This system is more selective than one-on-one mating; The one male that is able to build a harem of several females will be stronger and perhaps healthier than the average male and will likely pass on these traits to offspring.

In a few species, the female makes use of several mates. The Spotted Sandpiper lays eggs in several nests and the males incubate them. This system, called polyandry, allows one female to produce many eggs and is useful in situations where the breeding season is short, such as in the Arctic.

Promiscuous mating occurs when two birds have sexual relations and part company. Typically, and perhaps not surprisingly, the male takes off, leaving it up to the female to raise the resulting family. The most famous practitioners of promiscuous mating are the hummingbirds and woodcocks. Dr. Steve Kress, a noted ornithologist with National Audubon, says that typically, either the brood is small, such as in hummingbirds, allowing the female to raise the chicks alone, or the offspring are precocial, as in woodcocks, able to walk and feed themselves soon after birth.

Zoologist David Barash and Judith Eve Lipton reported in The Myth of Monogamy in 2001: “When it comes to actual reproduction, even bird species long considered the epitome of social monogamy, and thus previously known for their fidelity, are now being revealed as sexual adventurers. Or at least as sexually non-monogamous.” These include eagles and geese, long thought to be strictly monogamous.

What happens when a mate dies during the nesting season?

Birds that form monogamous pairs do so largely to share in the job of raising young. Nesting season is a dangerous time, full of threats to the parents as well as the eggs and nestlings. Predators, as well as disease and accidents, may kill birds, leaving a widow or widower to care for the nest. Among monogamous pairs, it’s difficult or impossible for one bird to find food and protect the nest.

Fortunately, there are what ornithologists Allan and Helen Cruickshank call “a floating population” of unmated birds that are available – even anxious – to jump in and replace missing mates.