The wise and wary corvids

Many people have remarked on the story that appeared in a recent issue of The New York Times about a scientist’s discovering that crows can recognize individual human faces, but a perhaps more remarkable account of crow intelligence appears in the current issue of Bird Watcher’s Digest

It’s long been known that the corvids – crows, ravens, magpies, and jays – are quite smart, doing things like using tools and employing automobile traffic to break open nuts. 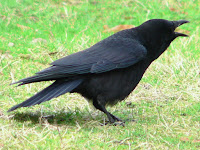 The Times story told of a wildlife biologist at the University of Washington who did an experiment in which crows on campus were trapped and banded by students wearing a “caveman” rubber mask. A Dick Cheney mask was used as a “neutral” mask by students not involved in the trapping.

In the weeks and months that followed, student volunteers who walked around campus with caveman masks were yelled at by the crows, which ignored the Cheney-masked students. Two years later, the number of crows recognizing the caveman mask as dangerous had spread to many birds that had never been trapped, indicating that parents and others in the community had taught offspring that this was a dangerous face.

In the current Bird Watcher’s Digest, columnist David Bird (yes, his real name – he’s a professor of wildlife biology at McGill University in Toronto) recounts an experience witnessed by ornithologist Russ Balda, which appeared recently in The Wilson Journal of Ornithology.

Mr. Balda was watching a crow eating seeds on a large platform feeder in Flagstaff, Ariz. Unlike other birds that came and went, the crow just stood there, hogging the feeder.

A Steller’s Jay landed on the edge of the platform and started scolding the crow for about 10 seconds. The crow ignored the pest, so the jay got closer and started making feinting movements at the crow. The crow then turned and faced the jay, which backed off.

The crow resumed eating, but the jay kept returning and repeating its harassment performance. Then the jay tried aerial techniques, swooping down on the crow a couple of times, without actual body contact.

After that didn’t work, the jay did something that astounded Mr. Balda. It flew to a mahogany tree and broke off a twig about four inches long. With the twig in its mouth and the narrow end pointed outward, the jay landed on the platform and lunged at the crow, narrowly missing it with the stick.

The crow jumped toward the jay, which dropped the twig and moved backward. The crow then picked up the twig and lunged at the jay!

The jay then took off, followed by the twig-wielding crow in hot pursuit.

In effect, and perhaps in fact, both the jay and the crow were employing a weapon – perhaps the first time this kind of “combat” has ever been observed, at least, by a scientist.

Weapon use of a different sort – bombing – has been observed in a couple of species. Professor Bird points out that Black Eagles have been recorded dropping sticks on the heads of intruders to their nests. “A female American Crow was observed dropping pine cones, not once but three times, onto the head of a human climber ascending to its nest,” he said.

Corvids’ using tools has been widely reported, and of course, a weapon can be considered a form of tool, but the Flagstaff indicate was different.

“Balda's observation may indeed be the first incident of a bird holding an object in a weapon-like fashion to undertake an aggressive action against another bird,” Professor Bird said.

He adds, “It was a pity that the crow did not have its own stick to duel with the jay.”