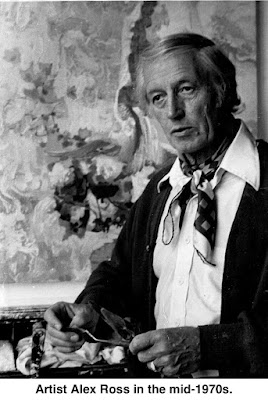 Alexander Ross:
Artist of the Clinch and Cover
Alex Ross was an artist of many skills. But to magazine editors in the 1940s, 50s, and early 60s, he was the go-to man for a “clinch picture.”
Born in Dunfermline, Scotland, in 1908, Alexander Sharpe Ross came with his family to Wilkinsburg, Pa., at the age of five and spent most of his early years in western Pennsylvania.
His talent for drawing was recognized early but he could not afford a formal art education and  was a largely self-taught artist. He did attend a year of night school in art at Carnegie Tech.
Over his long career Ross became a versatile artist, working in a wide variety of media —

oils, watercolors, serigraphs, collages, pastels, halftones, acrylics on gesso, and stained glass. While he spent his later years doing “serious” art, he is most remembered today for his three decades of magazine illustrations. Many of his magazine covers reflect an idealized, upbeat, post-war America — not unlike the pictures of Norman Rockwell and Ridgefield’s John Atherton; the three artists together produced hundreds of Saturday Evening Post covers.

Ross began his career as a commercial artist in Pittsburgh in the 1930s, doing mostly 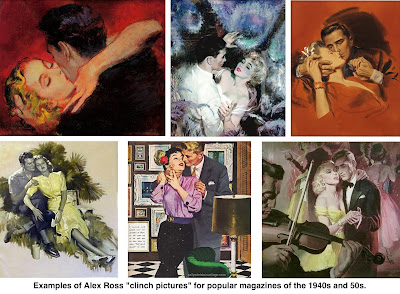 His first big break came in 1941 when Good Housekeeping selected one of his paintings from a roomful of candidates to be a cover on its magazine. It was the start of a 12-year relationship with the magazine during which he painted 130 covers. He was typically paid around $1,000 per cover — about $10,000 in 2017 dollars.
His work also appeared on the covers — and inside — of Saturday Evening Post, McCall’s, 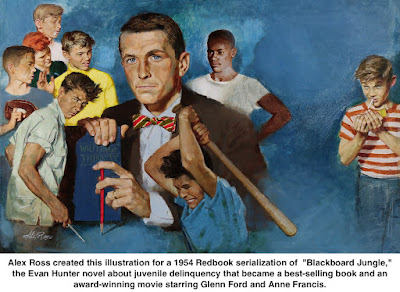 Often the covers included at least one of his four children, all of whom learned to model for him early on in their childhood.
Ross also became popular with magazine editors as an artist of “clinch” pictures to illustrate fiction stories. They depicted men and women in romantic positions, especially kissing. One writer 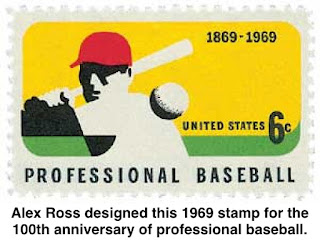 called them pictures “heavy with romance.”

He also did commissions. An assignment for the U.S. Air Force took him to Alaska, where he painted impressions of America’s frontiers, some of which are now in the permanent collection of the Air Force and have won several awards. In 1969 he designed a U.S. postage stamp commemorating the 100th anniversary of professional.
Around 1965, with more than three decades of commercial art behind him, Ross was able to spent more time at fine art.
“I became fascinated with French Impressionism,” he said. “After that, non-objectives occupied my interests — Picasso, Kandinsky, Miro, Calder. But I got away from these because I hate hard edges. Painting should have  some mystery about it.”
He developed what one writer called “an entirely different and refreshing style” and what he called “inventive realism.”
“My subjects are mainly flowers and dream-like human figures,” he said. “Flowers have 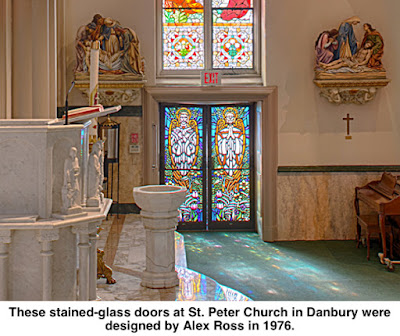 beautiful shapes that lend themselves to abstraction, and I incorporate new dimensions in them, using the essence of ‘flower’ from memory to create a whole gamut of emotions.” 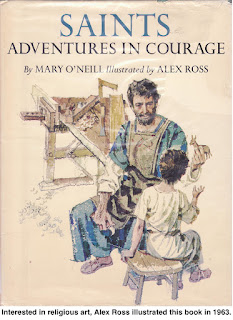 By the 1960s, Ross had also become interested in religious art.  “It’s one of the most fascinating fields of creation I can think of,” he said in 1974. He illustrated three religious books, including “Saints: Adventures in Courage” in 1963 for Doubleday and Company. In 1976, he designed several doors with stained glass windows for St. Peter’s Church in Danbury.
He exhibited widely and won many awards. His work is in the National Academy of Design, the U.S. Air Force Art Collection, the New Britain Museum of American Art, the Mattatuck Museum, and in many private collections.  Originals of his magazine illustrations can fetch thousands of dollars at auctions and sales.
Ross and his wife of 57 years, Helen, lived for nearly 30 years on Hawthorn Hill Road in Ridgebury. Their house had large windows and panoramic views 35 miles westward across the Hudson Valley. He died in 1990 at the age of 81.
As a youth, Alex Ross wanted to become not an artist, but a professional acrobat. For a while, he actually earned money with acrobatic performances.


“I wanted to fly through the air with the greatest of ease,” he said in a 1970s interview. “When sailing into a high layout back somersault, I felt like a bird, an eagle.” 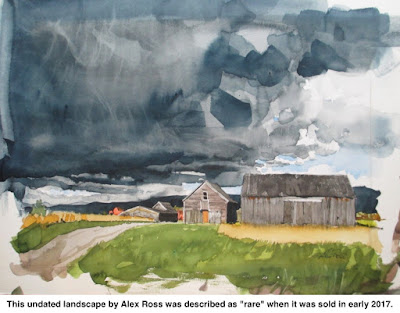