We have a little Thanksgiving tradition that might leave many people aghast: We feed vultures.

The day after Thanksgiving about a dozen years ago, we decided that instead of throwing the picked-over turkey carcass into the garbage, we’d recycle it by placing it in the back yard for crows, raccoons, skunks, and even foxes to snack on. It turned out that nature’s waste disposal team showed up first.

For many winters, Turkey Vultures had been roosting a quarter mile from our house. Our back yard is their back yard, so to speak. So when we offered that “dead meat,” the sensitive Turkey Vulture noses soon picked up the scent. Vultures landed in nearby trees to eye the potential meal. Once they determined the scene was safe, they dropped to the ground and chowed down.

Each year since, we’ve placed our turkey carcass in the back yard and every time, vultures have showed up to feast. One year, more than 50 were on the ground or in the trees at one time. 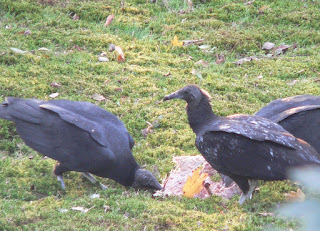 Black Vultures are common in the southern United States, but until recently, were rare in the Northeast. They have been extending their territory northward, probably as the winters get milder.

The heads are also different. The Turkey Vulture has a red, fleshy head while the Black Vulture’s head is gray. That is not always easy to see, especially at a distance.

This year, Turkey Vultures were first to spot our gift, but were so timid, most would not land. Soon, Black Vultures saw their cousins sitting in the trees, watching the carcass – what we call “vulching.” Much less afraid, the blacks zoomed down and began eating.

Despite competing for food, Turkey and Black Vultures often roost together, usually in tall evergreens. The birds at the top of the pecking order perch on the highest branches, while lesser birds are in branches below. Some authorities believe the top-most benefit from the heat rising from the bodies of the ones below. Those below often suffer the indignity of being pooped upon by the birds above. That’s why you will see vultures – and sometimes crows – with white spots all over their backs (as in the accompanying photo of Black Vultures in our back yard).

Incidentally, until recently, vultures – including their close relative, the California Condor – were grouped with the raptors, such as eagles, hawks and kites. Recent DNA studies revealed that vultures are more closely allied with storks, flamingos, spoonbills, and ibises.