The winds of autumn

March may come in like a lion, but there's at least a tiger roaring late each autumn. 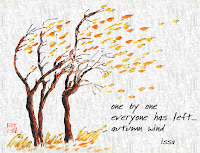 The winds that wash away winter and bring us spring have their fall counterparts. They have equal force, but get less good press. The lack of song and poetry about this season of the year probably stems from our displeasure with the icy blasts that fold up the last hardy flowers, kill most things green and send birds scurrying southward. Only skiers could like this season, and then only because they know what's coming soon.

An optimist might say autumn’s winds are part of nature's way of cleaning house, of sweeping away the old and preparing for the new, the groundwork for a distant new season of growth.

But if that sounds like a lot of hooey, look at it another way: This cold, blowy, barren season is great for making us appreciate the spring and summer all the more.
at November 19, 2007