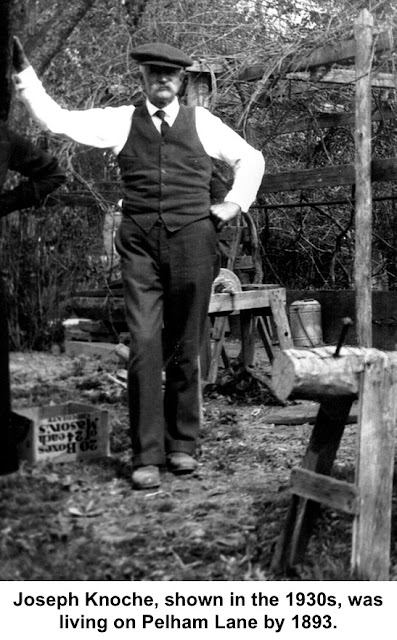 Joseph Knoche:
An Artist in Rock
Most artists work in media like paint, metal, stone, or fabrics. Joe Knoche worked in rocks — good, old, Connecticut countryside rocks. Like few others could, he created stone walls, fireplaces and foundations that have lasted more than a century and show no sign of deteriorating — unless at the hands of man.
His craftsmanship was so good that one of America’s leading artists of the 20th Century drew him at work many times.
Joseph John Knoche was born in Germany in 1868. When he was 14, his family moved to New York City where he apprenticed as a stonecutter at a cemetery. In 1893, he decided to come to Ridgefield, perhaps drawn by the need here for fine stonemasonry work on the many estates that were being built then. He and his mother moved to Pelham Lane on the Ridgefield-Wilton border.
Knoche established his own contracting business, with several employees. They did masonry 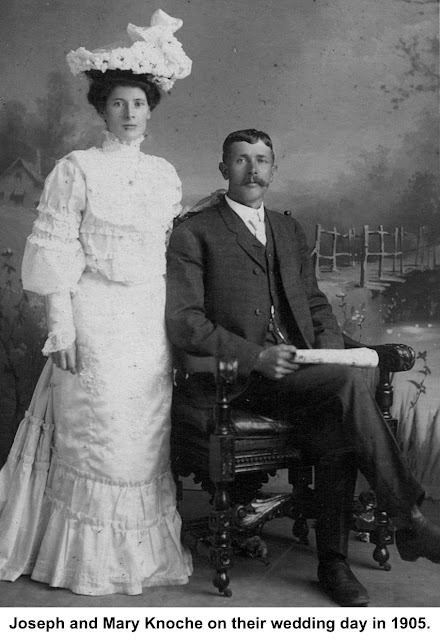 work on many of the large new and renovated “summer cottages,” as the estates were called.

Among the first walls he did were on the South Salem farm of a Dr. Agnew, which later became the home of U.S. Vice President Henry A. Wallace. He did Henry deB. Schenck’s new estate on Tackora Trail, which became the Mamanasco Lake Lodge, the Jesuits’ Manresa retreat house and now Christ the King religious center. And he worked on the new home of artist Frederic Remington on Barry Avenue.
For these and other projects Knoche would often do the foundations and fireplaces, and then would frequently build a stone wall along the front of the property or rebuild an old wall. In some cases he would also wall off  gardens or fields.
Around 1918, Knoche gave up general masonry contracting to concentrate practically exclusively on dry walls — that is, walls that employ no mortar, and are held together by the shape, weight and position of the rocks. And he was good at it.
“Everybody didn’t make dry walls the way Joe did,” said his daughter, Teresa Knoche Sheehy in an unpublished 1961 interview with Ridgefield Press reporter Peter W. Roberts. “He fit them right, he cut them correctly.”
The virtue of a dry wall is its appearance, she said.
“It’s more difficult than a wet one,” she pointed out. And when mortar was occasionally demanded by an employer, he would always conceal it.
Among the many homes on which he created rock walls and other stone structures were:
However, nowhere in the area is his work better known and appreciated than at the J. Alden Weir homestead along Nod Hill Road and Pelham Lane, now the National Park Service’s Weir Farm. Considered one of the great American Impressionist artists, Weir used Knoche’s talents to build walls 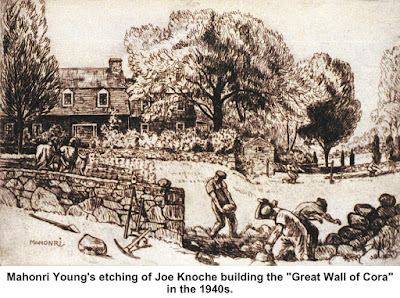 at his farm. So did his daughter, Cora Weir Burlingham,  who commissioned Knoche to erect more than a mile and a half of walls there. Knoche started that project in 1938 when he was 71 years old.

“Apparently, Mahonri Young liked to tease his sister-in-law, and the ‘Great Wall of Cora’ was his name for the system of elegantly constructed dry stone walls that Cora Burlingham had local mason Joe Knoche design and build on the property,” said Dr. Cynthia Zaitzevsky in a 1996 National Park Service report. “It is not yet clear whether Cora had a grand plan for the stone walls or whether they evolved incrementally, but they seem to have been completed by the late 1940s.”
Mahroni Young was so taken by Knoche’s work that he drew many pen-and-ink sketches of the mason at work. The best-known shows him working on that “Great Wall of Cora.”
“Joe Knoche and his men were one of Young’s favorite subjects,” said Dr.  Zaitzevsky. “He did numerous sketches of them, resulting in the etching [accompanying this profile], which shows the construction of one of the walls to the north of the house. The north side of the toolshed is also visible.
“None of Young’s Knoche sketches and etchings is dated, but they must have been done in 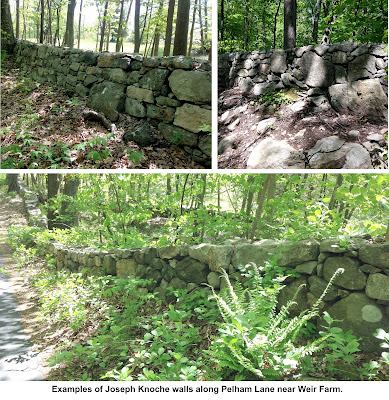 the 1940s,” she said. (Young, who is also profiled in Who Was Who, is especially known for his huge sculpture of his grandfather, Brigham Young, outside Salt Lake City, Utah.)

Despite time, weather, vandals, and even rock thieves, Knoche’s walls are still a prominent part of Weir Farm and line both sides of Pelham Lane where the Weirs, Youngs, Burlinghams, and Knoche himself lived. (In modern times Knoche’s grandson, also named Joe Knoche and who also lives on Pelham Lane, has done much carpentry work on Weir Farm.)
In the late 1930s, Knoche took a break from wall building to work on his own plan for a monument to the memory of J. Alden Weir. “The monument was to have been built on an island in what is known as Weir’s Pond,” according to Peter Roberts’ profile of the mason. Knoche spent 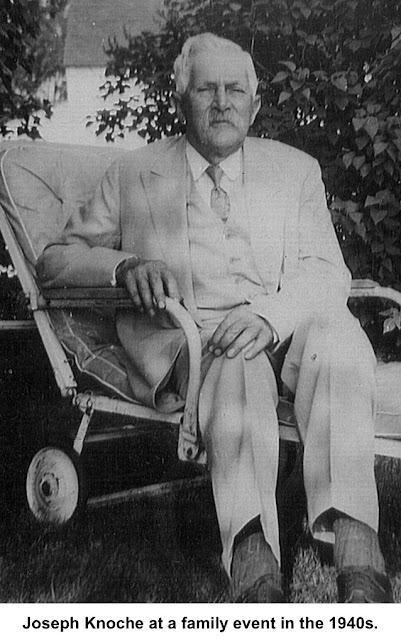 weeks in the woods at his home,  searching for a granite ledge from which he could cut stone for columns and haul them out by truck. He found such a spot and “at once began his work of quarrying out these granite columns. He was several months at this project and each column was a masterpiece.” Each was a foot square and six feet long.

The final monument was never built, however.
Joseph Knoche married Mary Margaret Hickey, a native of Ireland, in 1905 in Manhattan. Mary, who had come to this country in 1896 at the age of 13,  died in 1927. Joseph died in 1949 at the age of 80.
Joseph and Mary produced two sons and two daughters, plus many grand- and great-grandchildren, a number of whom still live in and about Ridgefield. One of those grandchildren, Joe Sheehy, was a young boy in the late 1940s. One of his strongest memories of his grandfather was the hands that had handled countless rocks and built miles of walls and foundations.