Samuel Carter:
The Drive He Couldn’t Escape
A Princeton and Oxford man who numbered F. Scott Fitzgerald among his friends, Samuel Carter started out as an American magazine writer in Europe during the 1930s, became a Madison Avenue advertising agency executive in the 40s and a radio-TV scriptwriter  in the 50s before turning to books in the 1960s.
Samuel Thomas Carter III was born in 1904 in New York, a son of a prominent New York City attorney. He studied at the Loomis Chaffee School in Connecticut and, like his father and more 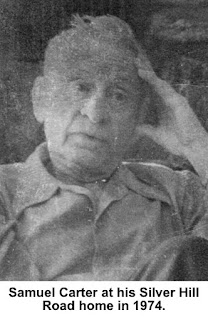 than 35 other members of his family, graduated from Princeton University. (The university called the Carters “probably the largest Princeton family on record.”) As a senior in the late 1920s, he was managing editor of The Daily Princetonian.

He went on to study at Oxford College in England.
During the 1930s, Carter lived in Paris with his French wife, writing for the Paris edition of the New York Herald Tribune and for several American publications. In 1936, he even wrote a 95-page, how-to guide on sailing, published by the Leisure League of America.
“Then, without knowing what was going on after a particularly dreary winter, my wife and I decided to go down to southern France and hike over the Pyrenees into Spain,” he recalled in a 1974 interview. “We took four weeks doing that, then we got to Spain and suddenly, we were in the middle of the civil war.”
After being stuck for five months in Spain, he and his wife escaped to Africa and decided the future of Europe was looking dim and to move to the United States.
“The Spain experience was good because I came back with a lot of material and started turning out short stories,” Carter said.
His varied career always focused on writing. Back in the States he wrote broadcast copy for two advertising agencies, J. Walter Thompson and then Stauffer, Colwell & Bayles, where he became a vice president. Eventually he left advertising, moved to Hollywood, and began writing for radio, mostly for the Lux Radio Theater, where he turned popular movie screenplays into one-hour productions that often featured the original film’s stars.
“That was a lot of fun because radio was so easy,” he said. But he also confessed that it was “awfully bad for you, simply because it was so easy. You had to turn it out in great quantities and do it hurriedly.”
He returned to New York and began writing for the new medium, television. Mostly he did screenplays for The Philco-Goodyear Television Playhouse. But he was also writing non-fiction pieces for magazines, especially Reader’s Digest. Around 1960, an editor there suggested that the topic of one of his articles could make the subject of a good book. A publisher agreed and a new career began.
By the time of his death in 1989, Carter had written 20 books of nonfiction, almost all of

them on subjects of American history, many of them related to the Civil War and several of them aimed at teenagers. For many years he was turning out a book a year, a pace that annoyed him but that he felt was needed to support himself and his family.

“I don’t suppose I handle my budget very well,” he admitted, “but I live on my advances. When I sign a contract, I get $5,000 ($25,000 in 2017 dollars) so there’s a great temptation to sign contracts and get money quick.  Then you’re faced with the problem of having to produce the book.
“I’ve been producing about one book a year, but I’d much rather not. I’d like to have two, maybe three years to do it. You’re always under pressure. It has its moments of exhilaration, but on the whole, it’s just grind, grind, grind.”
Among the best known and best reviewed of his 20 books was “Cherokee Sunset,” about the travails of the Cherokee Indian Nation of Georgia.
“The Cherokees were extraordinarily civilized,” Carter said when he was writing the book in 1974. “They had a government long before the state government, they had a supreme court long before Georgia, they had very enlightened law, and they had their own newspaper, an Indian language newspaper, which was the only one of its kind in existence.
“The net result of that was that it outraged the Georgians,” he said. “Here were these ‘savages’ outstripping them in every department — the way they dressed, the horses they rode, the houses they lived in. So the Georgians wanted them out of there.”
The fact that gold was discovered on Cherokee land in Georgia didn’t help the natives and when Andrew Jackson, no fan of the Indian, became president, the Cherokee were driven from their homeland. “They sent them out to Oklahoma on what was called the Trail of Tears,” Carter said. “A quarter  of them died on the way.”
Other books included “The Incredible Great White Fleet,” about a two-year, around-the-world voyage of 16 ships from Theodore Roosevelt’s refurbished Navy; “Cyrus Field: Man of Two Worlds,” a biography of the man who laid the first Atlantic Cable; “The Siege of Atlanta, 1864,”  “Blaze of Glory: The Fight for New Orleans, 1814-1815,” which was written for teenagers; “The Last Cavaliers: Confederate and Union Cavalry in the Civil War,” “Rebel: The Life and Times of John Singleton Mosby,” about one of the Confederate Army’s top officers; and “The Riddle of Doctor Mudd,” which deals with the man who set the broken leg of John Wilkes Booth just after Booth assassinated Abraham Lincoln.
Carter was proud of the fact that F. Scott Fitzgerald was a friend.
“I met him when he was down in Baltimore at the Turnbull estate — I roomed with his cousin,” he said. “He and I got very interested in the horse races and we used to go down to Chevy Chase, then we’d come back and stay at Scott’s house.
“It was a weird Charles Addams kind of place in the middle of a swamp,” he added. “Zelda was there for a while; then, finally, they carried her off to the sanitarium.”
He once considered writing about his experiences with Fitzgerald, but decided not to. “It sounded a little ghoulish,” he said. “It would have been capitalizing on a friendship I rather prized.”
Samuel Carter lived on Silver Hill Road in the 1970s and eventually moved to Heritage Village in Southbury, where he died in 1989 at the age of 84.
Carter believed writing is a native talent — and not something at all romantic.
“I think you're just born with that — it’s sort of a potential itch,” he said. “For people that ask your advice about writing, I say, ‘Don’t do it if you can possibly help it, but if you can't help it, you’re going to be a writer.


“I still have that feeling. I get so fed up and yet even though I’m fed up, I know I’m going to go on doing it. It’s just a drive you can’t escape.”