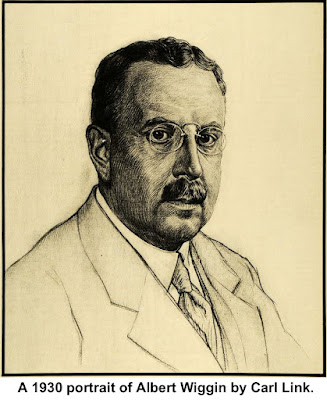 Albert H.Wiggin:
Chase’s Controversial Chief
Throughout his long career, Albert H. Wiggin of Peaceable Street did wonderful things for his company, the Chase National Bank in New York City. He helped make Chase one of the biggest and most influential banks in the country, if not the world, and aided European countries recovering from World War I. But his reputation was tarnished  after the Crash of 1929, during which he pulled off maneuvers that made millions for himself in ways that wound up being investigated by the U.S. Senate.
Once listed among America’s richest people, Albert Henry Wiggin was born a minister’s son in 1868 in Medford, Mass. He never attended college and instead went to work in Boston straight out of high school, soon becoming a bookkeeper for a local bank. By the age of 23, he was an assistant for a national bank examiner.
He continued to rise in the Boston banking world and in 1899, moved to New York where he became at the beginning of the 20th Century one of the founders of Bankers Trust (which, at the end of the century, was acquired by Deutsche Bank).
It was around this time that Wiggin caught the eye of Alonzo Barton Hepburn, CEO of Chase National Bank. Hepburn liked the young man’s ideas, hired him, and in 1904 Wiggin was named the 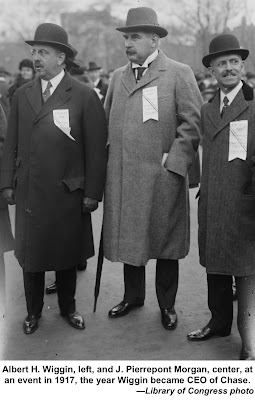 youngest ever vice president of Chase National Bank. He also became the youngest member of the bank’s board of directors, a situation that irked many veteran Chase executives.

Hepburn liked Wiggin so much, he encouraged him to establish a summer place in Ridgefield, and sold him some of the backland of his own estate on High Ridge, called Alnacraig. Wiggin built a many-roomed mansion at 47 Peaceable Street, calling it Peaceable Acres. The estate overlooked the Ridgefield Golf Club, later Ward Acres horse farm.
Locally Wiggin was known for his beautiful daughters, Marjorie and Muriel, and for being among the first owners of an automobile.
In 1911 Wiggin became Chase’s president. Under his leadership the bank’s deposits rose from $91 million in 1910 to more than $2 billion in 1930. He was CEO from 1917 until 1930. Time Magazine, which put him on the cover in 1931, called Chase “the biggest bank in the world” at that time.
In 1926, Chase merged with Mechanics and Metals National Bank to become the nation’s second largest bank, with Wiggin at its helm. At the time, The New York Times said Wiggin was 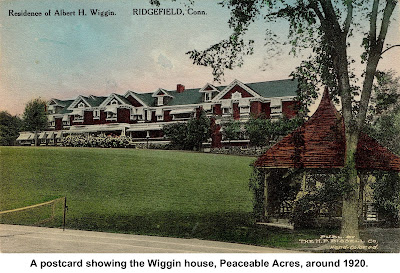 known as “a man of a million friends,” adding that “intimate associates in [the bank’s] various fields of activity describe him as a great organizer and an inspiring leader, quick in decision and unerring in judgment.”

Despite this acclaim, some authorities were soon labeling Wiggin a scoundrel after it was revealed that, during the period of the 1929 stock market crash, he had been selling short some 42,000 of his personal shares in Chase National Bank at the same time he was committing Chase’s money to buying. He put his earnings in a Canadian holding company to avoid taxes, and made millions that the bank itself did not discover until a later U.S. Senate investigation.
“This is like a boxer betting on his opponent — a serious conflict of interest,” said financial reporter Andrew Beattie.
And yet, he did nothing illegal.
Ferdinand Pecora, chief counsel to the Senate Banking Committee, said of Wiggin, “In the entire investigation, it is doubtful if there was another instance of a corporate executive who so 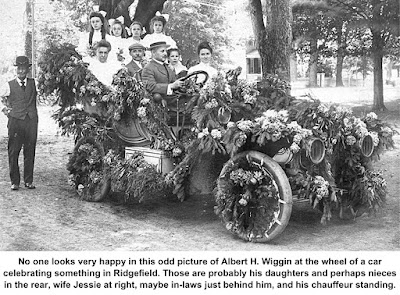 thoroughly and successfully used his official and fiduciary position for private profit.”

Economics professor and market historian Charles Geisst said what Wiggins did “gave banking and the stock market a bad name for at least two generations after the Crash.”
Wiggin was forced to retire, but was never prosecuted for any legal wrongdoing. He was given a $100,000-a-year pension from the bank ($1.7 million in 2016 dollars), but later turned it down after a public outcry.
As a result of the case, Congress added what some called the “Wiggin Provision” to federal Securities Exchange Act to prevent company directors from selling short on their own stocks and making a profit from their own company’s bad times.
Despite this episode, Wiggin received praise for his efforts to curb the crash of 1929. Said The Times in 1951, “Mr. Wiggin was one of the banking leaders who made large sums available to boster the slipping market. The confidence that he and other leading bankers showed in the country was credited with having done much to prevent the complete collapse of the nation’s financial structure.”
Wiggin had sold his Ridgefield home in 1921, long before the crash, and eventually had a retreat on the shore in Greenwich where he died in 1951 at the age of 83.
He was a benefactor of many organizations. When he was a young man, he began collecting art prints, drawings, and watercolors, as well as antique books. He donated his huge collections of 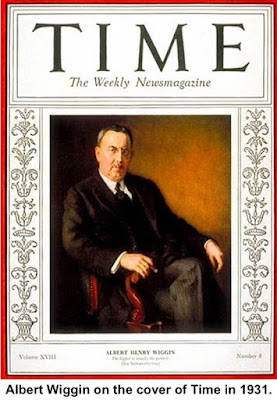 In 1949, Dodd, Mead and Company published Marjorie Wiggin Prescott’s biography of her father, New England Son. According to the dust jacket, “This is the life of Albert Henry Wiggin, a parson’s son who struggled his way out of Cousin Walter’s hand-me-downs to the eventual presidency of the largest bank in the world. It is a story of hard work, close friendships and salty New England humor — a uniquely American success story. It is a portrait of a remarkable man, the man who built the Chase Bank; but it is, more than that, the portrait of a golden era of American growth and optimism. You will share Mrs. Prescott’s amusement at the recollection of her father’s first job in Boston, when one of his daily duties was to make sure that a certain elderly party on Louisburg Square was likely to live long enough to pay off his bank debt. You will smile with her at the ironic Wiggin reply to a ceremonious cable from a banking group in London.”
The book, according to Ridgefield historian Richard E. Venus, also “presented a stirring defense of her father.”
He added, “One cannot read this warm portrayal of a father by his admiring daughter without gaining a large amount of respect for one of the most famous bankers that this nation ever produced.”