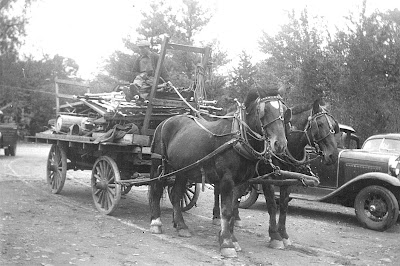 War Horses
This odd scene recalls the era of World War II when Ridgefielders, trying to do their part in the war effort, went out of their way to collect scrap — what we today would call “recycling.”
The horse-drawn wagon is loaded with metal contributions in what was later called “Ridgefield’s greatest wartime scrap drive.” We believe the snapshot was taken Oct. 17, 1942, when hundreds of local volunteers collected more than 133 tons of metal in a huge, one-day scrap drive. (That total, by the way, equalled 166 pounds per resident of Ridgefield at that time.)
The use of the horse-drawn transportation was probably designed both to entertain and to emphasize the need to conserve gasoline.
Scrap drives — wartime versions of today’s “recycling” — were important sources of metal and other materials to be melted and reformed into ships, tanks, guns, ammunition, and other pieces of weaponry.
During the last three years of World War II, Ridgefielders collected 539,262 pounds of iron and steel — nearly 270 tons. They also donated 12,644 pounds of waste fats from kitchens; 48,925 pounds of tin (mostly cans); 4,000 pounds of rags; and 292,975 pounds of paper.
According to a Ridgefield Press account, “great piles of scrap metal began to appear in George G. Scott’s lot at the rear of the town hall (about where Colby’s is today). People put out piles of metal in front of their homes and it was picked up and transported to the main collection points by Irv Conklin’s horses, Ray Keeler’s trucks and a Dodge truck that belonged on the Swords estate on West Lane.  (In 1975, 50 years after the war, Ralph Deli-Bovi, then owner of the former Swords estate, still had that truck.)
As noted in an earlier posting on Old Ridgefield, the town’s scrap metal-collecting efforts gained national attention when the Pulitzer Prize-winning columnist Westbrook Pegler, who lived on Old Stagecoach Road, was photographed in Life magazine, removing his car’s bumper in front of town hall to contribute to the war effort.
A bumper is nice, but nothing compared to Mrs. B. Ogden Chisholm’s donation: She gave her entire 1933 Cadillac roadster.  The car was shown in The Press (and on Old Ridgefield) being dismantled and turned into “scrap.”