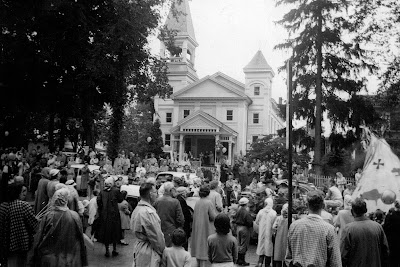 A Lost Landmark
The black-and-white picture here is a rather remarkable snapshot in several ways: The crowd, the trees and the beauty of a long-lost landmark.
First off, for newer-comers, the scene is Main Street looking west from about where folks sit in front of Tazza and drink coffee. That big, handsome building is the Jesse Lee Methodist Church on the corner of Main and Catoonah Streets. The accompanying color photograph shows what the same corner looks like today.
The occasion is the September 1958 parade that marked the end of Ridgefield’s six-month celebration of its 250th anniversary. That tent at the right with a cross on it was part of a float, possibly done by St. Mary’s School pupils. (Many other pictures of 250th anniversary parades have been posted here.)
Trees dominate the picture, especially that Norway spruce at the right. It was one of two spruces that stood tall in front of the rectory, hidden at right by the boughs. The other, just a bit north, snapped in half when Ridgefield’s village was hit by a twister on July 13, 1950.
The tree at the left would have been near the front of Bedient’s or now, Books on the Common.
Then there’s the church. This picture does a remarkably good job of capturing the beauty of the facade of the building. If you enlarge the picture and look closely, you can see many find details like dentilated moldings, gable carvings, and nice use of clapboards and facings. And, of course, there are the two handsome towers.
Why, many have asked, would a building as beautiful as this, in the very center of the town, be torn down, as happened in 1964?
Several factors contributed to the church’s demise. To the growing congregation of Methodists, the church’s serious lack of parking space became a real problem. The building could not be expanded to handle the increasing needs of the membership. Then, too, the building was old — the earliest parts dated from 1841 — and was probably expensive to maintain.
So the congregation moved a couple blocks south to its present site, building a much bigger church, with support facilities and plenty of parking spaces.
Couldn’t the building still have been preserved? Probably, but in the early 1960s, Ridgefielders were only beginning to develop a strong preservationist movement that resulted in establishment of historic districts and a commission to oversee them, as well as organizations like the Keeler Tavern Preservation Society, the Ridgefield Preservation Trust, and the Architectural Advisory Committee.
The church might have been nice for a new, smaller religious congregation, but none was available or wanted the building. It could have been “repurposed” but apparently its age and the fact that it looked so much like a church dissuaded potential buyers. (However, the rectory next door — which looks like a Victorian house — was repurposed, and today serves as offices and shops.)
If the same opportunity were to occur today, the church would probably have been preserved, 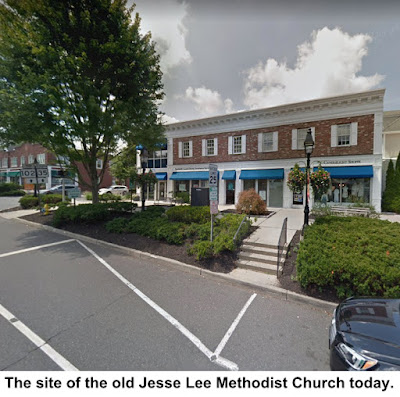 perhaps for use as shops or offices, or maybe even as a historical museum.

The church was replaced by a two-story, flat-roofed building of stores and offices that was aimed at looking colonial, with brick to match the town hall and the Ernest Scott buildings on two other nearby corners, and the firehouse and telephone building up Catoonah Street.
Incidentally, in 1964, the historic Philip Burr Bradley/Biglow/Ballard house farther north on Main Street was also torn down. That was not the choice of the townspeople, however; part of Elizabeth Ballard’s bequest of the land to the town included that the house be razed so the land could become Ballard Park. She also did not want the house to be a burden on a community that had only recently set up the Community Center in the Lounsbury mansion — Ridgefield already owned one big old mansion on Main Street and didn’t need another, she felt.