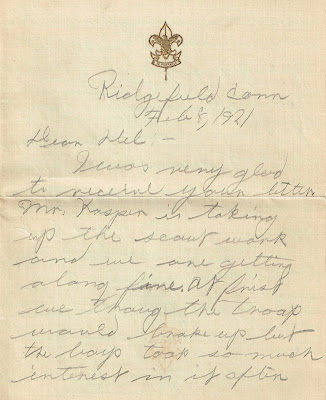 Boy Scouting, 1921
A rare glimpse into early Boy Scouting in Ridgefield is offered by a letter from one scout to another, mailed in 1921.
William Dingee, then 16 years old, is telling his older friend, Adelmar “Del” Bryon, then 22, about current scouting activities. Bryon, who was a member and possibly a leader of the local troop, was off studying at Princeton.
Dingee, son of a town constable, was born in Redding and had moved to Ridgefield two years earlier. He grew up to be very active in town, running a couple of restaurants, founding Dingee Electric in 1950, serving on the Board of Finance and for 50 years on the Ridgefield Volunteer Fire 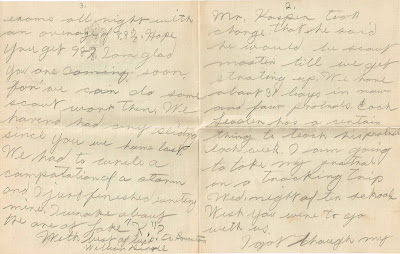 Department, and belonging to many local organizations.

Bryon, son of the local doctor who developed Bryon Park (Fairview and Bryon Avenues, and Greenfield Street), became a Presbyterian minister and missionary in China. Later in life, he settled in the Catskills. His sister, Kathryn, founded the town’s first Girl Scout troop in 1921, the same year this letter was written. (His son, Dick, is active in Old Ridgefield.)
Dingee died in 1980, Bryon in 1995.
The letter speaks of Mr. Kasper — that’s Joseph F. Kasper, an early leader in Ridgefield scouting (some have said he founded Boy Scouting in Ridgefield; the letter suggests he wasn’t the initial leader, but he may have been the first to make things work).
Here is the text of the letter, written on official Boy Scout stationery (a few spellings have been corrected):
“Ridgefield, Conn.
“Feb. 8, 1921
“Dear Del —
“I was very glad to receive your letter. Mr. Kasper is taking up the scout work and getting 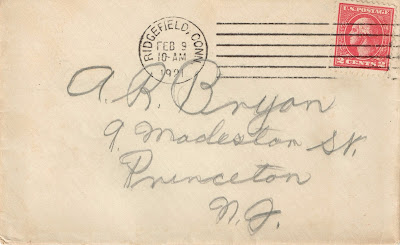 along fine. At first we thought the troop would break up, but the boys took so much interest in it after Mr. Kasper took charge, that he said he would be scout master till we get starting up. We have about 31 boys in now and four patrols. Each leader has a certain thing to teach his patrol each week. I am going to take my patrol on a tracking trip Wed. night after school. Wish you here to go with us.

“I got through my exams all right with an average of 88%. Hope you got 98%. I am glad you are coming soon, for we can do some scout work then. We haven’t had any sliding since you were home last. We had to write a composition of a storm and I just finished writing mine. I wrote about the one at Lake ‘K’? [probably Kitchawan, in Lewisboro].
“With best of luck
“William Dingee”