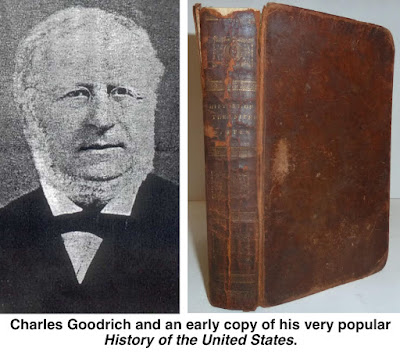 Charles A. Goodrich:
A Place in History
As parents,  Samuel and Elizabeth Goodrich must have been amazing. One of their children, Samuel — better known as Peter Parley — produced more than 100 books for children and adults in the 19th Century and hobnobbed with some of the literary greats of his era.
A daughter, Abigail, became one of America’s first female magazine editors and provided information and advice to countless 19th Century families.
And a son, Charles, wrote more than two dozen books of history, geography and religion that helped educate generations of Americans.
For both Abigail and Samuel, their only formal education was the little red schoolhouse on West Lane in Ridgefield, ending in the eighth grade. Charles was a bit more fortunate: He went to Yale after West Lane.
Charles Augustus Goodrich was born in Ridgefield in 1790. His father, the Rev. Samuel G. Goodrich, was the third minister of the First Congregational Church. His mother, Elizabeth Ely Goodrich, was a member of one of Connecticut’s founding families. His more famous brother, Samuel, was three years younger, and his sister Abigail, two years older.
They all grew up at first in a house on West Lane and later a larger home still standing today on High Ridge at the head of Parley Lane.
After graduating from Yale in 1812, Charles Goodrich studied theology and was ordained in 1816. His first post was at the First Congregational Church in Worcester, Mass. In 1820, after dealing with much “acrimonious controversy” involving local church politics, he left Worcester and headed for Berlin, Conn., to which his parents had by then moved. There he helped a local parish while beginning to write magazine articles and books. Many of the latter he did in association with his brother, Samuel, who lived in Boston.
Among his first books was History of the United States of America,  published in 1822. It quickly became one of the most popular history textbooks in the nation, and was used in many schools across the country until more than 30 years after his death. The New York Times called it “one of our best standard school books.”
Other popular books were Lives of the Signers of the Declaration of Independence (1829) and A Child’s History of the United States, first published in 1855. Both were being reprinted long after he died. Being a minister he also wrote books on religious themes, one of the most popular being Geography of the Chief Places Mentioned in the Bible (1855).
His interests also included politics and Goodrich served as a Connecticut state senator from Berlin in 1838. He moved to Hartford, home of his ancestors, in 1848 and died there in 1862 at the age of 71.  An obituary in The New York Times called him “a very gifted man and a most accomplished scholar. His mental organization was active, though of that sensitive nature which caused him to shrink from rough contact with the world. Mr. Goodrich’s love for his fellow men was refined, charitable, and of the most enlarged order.”
Today,  what is perhaps Charles Goodrich’s most famous legacy is a motto still often heard. Various authorities say he popularized “A place for everything and everything in its place,” by being the first person to have used the concept in print — in an 1827 magazine article on “Neatness.”
His version wasn’t quite as pithy as today’s epigram, however. He wrote:  “Have a place for every thing, and keep every thing in its proper place.”