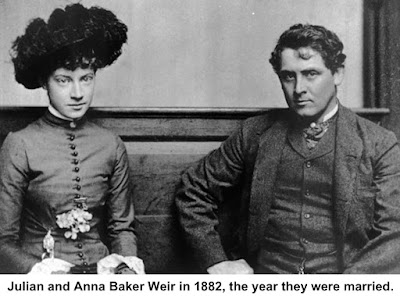 J. Alden Weir:
Our Unstamped Artist
A half dozen Ridgefield artists have been celebrated on U.S. postage stamps. Some, like Frederic Remington and Charles Sheeler, have been honored on more than one stamp. Yet J. Alden Weir, whose homestead is now the only National Historic Site commemorating an American painter, has been unrecognized philatelically.
Except in the Central African Republic, which has issued several stamps in his honor and where he no doubt never set foot.
The artist will, however, be remembered on the Weir Farm National Historic Site Quarter, which is scheduled to be released in 2020 as part of the U.S. Mint’s “America the Beautiful Quarters Program.”
Born in 1852 at West Point, N.Y., Julian Alden Weir got his first training as an artist from his father, Robert Weir,  a painter who spent more than four decades teaching drawing at the U.S. Military Academy. He took courses at the National Academy of Design and in 1873 went to Paris where he studied at the Ecole des Beaux-Arts and became enchanted with the concept of the plein air painting — working outdoors amid nature. He was also introduced to Impressionism, but was not at all enchanted, calling the style “worse than the Chamber of Horrors.”
He returned to the U.S. in 1877, but continued to return frequently to Europe, working at times with Eduoard Manet and James McNeill Whistler (he described Whistler as a “first-class specimen of an eccentric man”). He began exhibiting his paintings in Paris and other cities including, of course, New York, where he taught painting at the Art Students League and Cooper Union, did 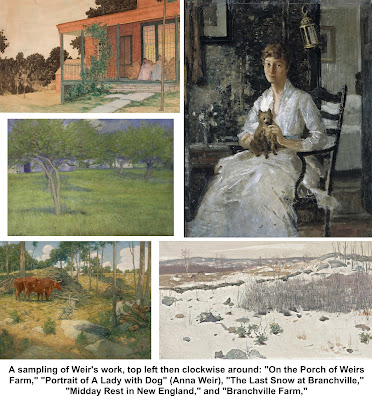 portrait commissions, and had his home.

In 1882,  Erwin Davis, for whom Weir had procured a number of pieces of art in Europe, saw a painting that Weir had just acquired for $560 (about $14,700 today). Davis wanted the painting and offered Weir an old Beers family farmhouse at Nod Hill Road and Pelham Lane in Ridgefield, along with 152 acres in both Wilton and Ridgefield, in exchange for the painting and $10 cash.
Though he had had a place in the Adirondacks, Weir loved the Connecticut farm, “drawn to the modest-scale scenery in Branchville — the meadows of corn and grass, the apple trees, the rocky terrain, the stone walls, the English-style barns, and the small red Greek Revival farmhouse,” Jay Axelbank wrote in The New York Times in 1999.
Weir subsequently expanded the farm to 238 acres and over the years he lived there, continued to maintain it as a working farm. Today,  60 acres belong to the Weir Farm National Historic Site, and another 110 acres are permanently protected by the Weir Farm Art Center, formerly the Weir Preserve.
For the artist, the farm became the inspiration for many paintings and encouraged his move to Impressionism. Weir often painted outdoors there, and invited many of his friends to do the same. Among his visitors were Childe Hassam, Albert Pinkham Ryder, John Singer Sargent, and John Twachtman, all of them Impressionists. By the early 1890s, he considered himself an Impressionist.
While he is most widely known for his oil paintings, Weir was an accomplished artist in watercolors, etching, and stained glass. He painted not only landscapes, but many portraits and figure 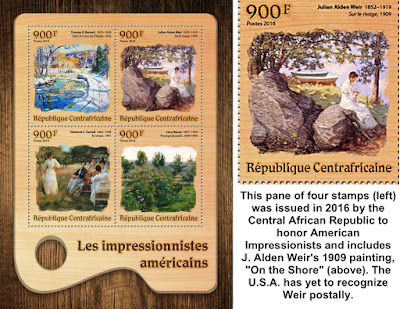 studies. Today his works are in most major American museums of art, and in many European museums.

In 1882 Weir met Anna Dwight Baker, who was a 19-year-old student in his art class. It was love at first sight; the couple was engaged three weeks later, and married the next year.  Anna Weir was the subject of scores of paintings and etchings by her husband, many of which are now in museums and galleries. “She is remembered today as one of Julian’s staunchest supporters and his artistic inspiration,” says a Weir Farm profile of her.
They  had three daughters: Caroline, Dorothy and Cora. A son, Julian Alden Jr., died as an infant. Anna died 10 days after Cora’s birth in 1892. Later that year Julian married Anna’s sister, Ella Baker, who had been helping take care of his children, and he also inherited the Baker family farm in Windham, where he would also stay and paint. (His family still owns the farm.) Ella, who had also studied painting, became more interested in photography and practiced the art much of her life.
By the 20th Century Weir had become a major figure in American art. A founder of the Society of American Artists, he served as its president and also led the National Academy of Design and the Association of American Painters and Sculptors. He was on the board of the Metropolitan Museum of Art.
J. Alden Weir died in 1919, but the farm continued to be the home of artists for many decades to come. Ella lived on the Branchville farm with her stepdaughter, Dorothy, until her death in 1930. A year later, Dorothy married Mahroni Young, the noted sculptor, who moved to the farm and expanded its barn studio. Young created the sculptures for his famous Mormon monument, “This Is the Place,” in his studio at the farm and they were transported by train to their huge pedestal outside 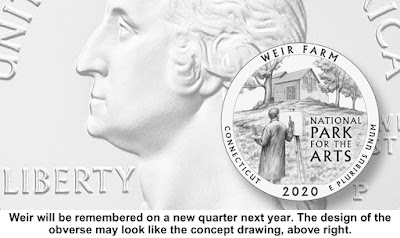 Dorothy died in 1947 and Young, 10 years later. The farm was then purchased by Sperry and Doris Andrews, husband and wife artists who had been friends of Young. They lived the rest of their lives there and spearheaded the efforts that led to its becoming a National Park site in 1990.
Weir’s older brother, John Ferguson Weir, was also a well-known landscape artist, but chiefly of the Hudson River school. In 1869 he was hired as a professor of painting and design at Yale University, where he created the first academic art program on an American college campus.
John stayed at the Branchville farm while Julian and Anna were on their honeymoon in Europe. At one point he wrote his brother, “I advise you to hang on to this place, old boy; a ‘lonesome lodge’ which a pleasant place of retreat in times of storm or drought is no bad thing to have — for an artist. Keep it trim and untrammeled and you will find it a haven of refuge.”