Frank Gibney:
Our Man In Asia
If Frank Gibney were still alive, he would hardly be surprised by the economic battles being waged today between the United States and China. He warned of them long ago.
Back in 1992, his book, “The Pacific Century,” predicted the rising economic power of  eastern Asian nations in the then-coming century. It was a companion to a 10-part PBS series, produced by his son, documentary filmmaker Alex Gibney. Few saw the series, however, because PBS scheduled it at one of the least-watched time slots of the week: 6 p.m. on Saturdays. Nonetheless, it won an Emmy for documentaries that year.
In the book Frank Gibney predicted that in the 21st Century, Pacific Rim nations like China, Japan, and Korea would become economic powerhouses, much more important to the United States than Europe. And how the U.S. handled relations with those nations would be critical.
“Gibney points out that, by the mid-1990s, our trade with the Pacific nations will be more than double our trade with Europe,” said Ray Cushing in a review of the book. “And yet, lack of understanding, even outright ignorance of these countries, is still all too prevalent in the United States.”
The book was written by a man who spent much of his boyhood in Ridgefield, the son of the couple who owned and operated the Outpost Inn on Danbury Road, now the site of Fox Hill condominiums.
And Gibney knew what he was talking about: He had spent his early career interrogating Japanese prisoners of war, devoted much of his later life covering Asia as a journalist living in Tokyo, and became a founder of the Pacific Basin Institute.
Frank Bray Gibney was born in 1924 in Scranton, Pa., and came to Ridgefield as an 11-year- 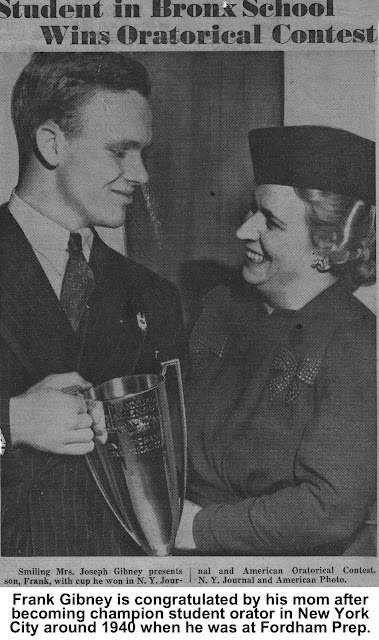 old when his parents, Joseph and Edna Gibney, took over the Outpost Inn. A former singer, his dad was a veteran of Longchamps and other prestigious restaurant operations, and turned Outpost into dining destination for many Ridgefielders as well as celebrities, including Lily Pons, Lawrence Tibbett, Gloria Morgan Vanderbilt, Clare Boothe Luce, and Eleanor Roosevelt (who, as first lady, drove herself there for lunch).

A bright boy, Frank Gibney commuted to Fordham Prep in the Bronx where he graduated as valedictorian of his class in 1941. He won a scholarship to Yale, but the war forced him to leave for service in the military. He was sent to the Navy’s elite Japanese Language School at the University of Colorado and became a naval intelligence officer.
Gibney was assigned to a post in Hawaii where he interviewed many Japanese prisoners of war.  His dad, who had also entered the Navy after the war broke out, was working as a supply officer at the time. “When I became an intelligence officer,” Frank said in a 1992 interview, “I was assigned to interrogate Japanese POWs at a secret location in Hawaii. And who was in charge of supplying that secret location? My father.”
Later he was stationed in Japan during the postwar occupation. There he maintained contact with some of the prisoners he had once interviewed “through reunions at a sushi restaurant,” he said. “I was a small human bridge between Gen. Douglas MacArthur’s conquering army and a puzzled but receptive Japanese public.”
In 1947 Gibney came home and was looking for a job. While he was staying with his parents, “there was a gentleman who used to spend a lot of time at the Outpost Inn, who heard me talking about my situation,” Gibney recalled. The gentleman was Westbrook Pegler, a Pulitzer Prize- 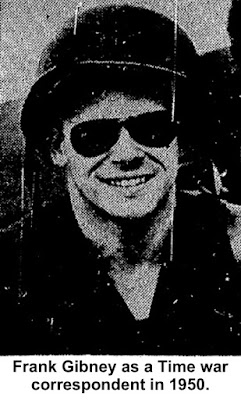 winning syndicated columnist, who lived in Ridgefield. Pegler was impressed with the young man and called the Associated Press, which immediately hired him. Soon afterward he joined Time magazine as a correspondent  in both Europe and Asia. By 1949, he was Time-Life bureau chief in Tokyo.

In June 1950, while covering the Korean War, he was injured when an explosion wrecked the Han River Bridge, south of Seoul, Korea, as he was crossing it with two other journalists. “The three were fleeing from Seoul ahead of advancing Communist forces from the north,” the Associated Press reported. “The bridge was blown by the southern forces to slow the Red advance.” He was flown to Japan for treatment for relatively minor injuries.
Gibney later became a senior editor at Newsweek and a staff writer for Life Magazine.
He also wrote a dozen books including “The Khrushchev Pattern,” “Korea’s Quiet Revolution,” and in 1960, “The Operators,” which was not about international politics, but about corporate criminals. “They’re Living It Up At Our Expense,” said the headline in The New York Times Book Review, adding in a smaller headline, “White-Collar Chiselers Thrive in the U.S. As Never Before, a Reporter’s Study Finds.”  It sounds like the 21st Century.
In 1979, he co-founded the Pacific Basin Institute in California “to further understanding, on both sides of the Pacific, of the tremendous importance of their relationship and their shared responsibilities,” the institute says. The organization moved to Pomona College in 1997.
Frank Gibney died in 2006 at the age of 81. Among his survivors besides Alex were six other children, including  James Gibney, who became deputy op-ed page editor at The New York Times, features editor at The Atlantic Monthly, and is now an editorial writer at Bloomberg Opinion.
One of James Gibney’s toughest projects was a six-year stint overseeing the publication of the Encyclopaedia Britannica in Chinese, Japanese and Korean editions — “a task,” said  Times reporter Margarlit Fox, “that required him to be a scholar, editor and diplomat in equal measure.”
“One of Mr. Gibney’s most daunting tasks was to publish a Chinese edition, released in 1986,”  Fox said. “A six-year undertaking, it ran to 10 volumes and contained newly commissioned articles by Chinese scholars that dealt, however gingerly, with sensitive subjects like Stalin, the Korean War and Taiwan.”