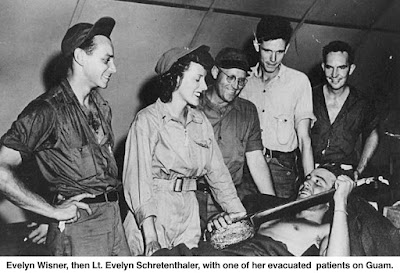 Evelyn Wisner:
A Hero At 7,000 Feet
War heroes always seem to be men. Not so with Evelyn Schretenthaler Wisner.
The World War II flight nurse landed in war zones, located seriously wounded Marines, loaded them on an airplane, and treated them while flying high over the Pacific Ocean. How many lives she may have saved or help save will never be known.
“Those young Marines were so glad to get on that plane — all they wanted was a drink of water,” Wisner told Kate Czaplinski of The Ridgefield Press in 2010.
Near the war’s end, she recalled, many of the wounded soldiers looked so young she wanted to hold them on her lap like children. “They were beat-up kids,” she said.
Evelyn Schretenthaler was born in 1920 and grew in a small North Dakota town.  She graduated from nursing school and, as a 22-year-old RN, decided to help the war effort by becoming 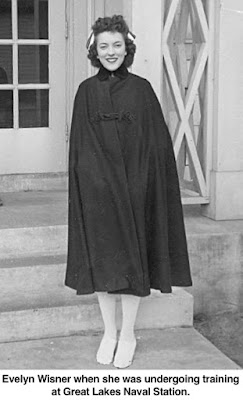 a Navy nurse. She underwent training at Great Lakes Naval Station where she was the only member of 200 in her class who met the tough requirements for becoming a flight nurse, including being in top physical condition and having the ability to swim.

Lt. Schretenthaler then wound up being one of only a dozen nurses, based in Guam, who flew into combat zones in the Pacific to rescue the seriously wounded.
Flights would take off at midnight and land at dawn on islands such as Iwo Jima. There she spent only enough time on the ground needed to screen the patients who required the most urgent care and get them loaded onto the aircraft.
It was dangerous work. “There was shelling,” she told James Brady for his book, Why Marines Fight. “We could see it and hear it. I was young and frightened.” 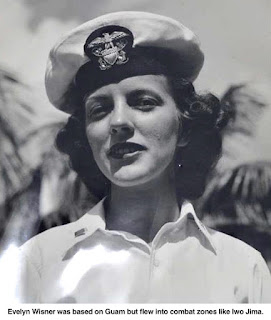 She flew on C-47 cargo planes that were converted into flying hospitals — except that there were no doctors on board. “We were on our own over all that water,”  Wisner said. “Me, the pilots and a medical corpsman,” treating 18 to 20 soldiers, mostly Marines from the fighting on Iwo Jima and later, Okinawa. The patients were headed for treatment at hospitals in Guam, Hawaii or in the States.
Treating wounded patients at 7,000 feet had special hazards. The cabins were not pressurized and at high altitudes bleeding was exacerbated. On her very first flight, “I almost lost a patient because, at 7,000 feet, he started to bleed, and I got the pilot to drop down to 3,000, even though it was bumpy.” The soldier survived.
The flights also carried food and supplies to combat zones. “We had our hands full,” she said.
In her interview with Czaplinski, Wisner recalled being asked to take a soldier home on the plane, even though he seemed uninjured.
“I looked at him and said, ‘Well, what’s wrong?’ I was told, ‘Nothing, he’s 16 — take him home.’
“A lot of young men lied then [about their age] but it was rare for them to make it that far,” she said. “Usually they got caught in boot camp.”
Wisner missed the announcement that the war was over. “When the war ended, I didn't know — I was up in the air,” she said with a smile.
Back in the U.S. she continued to treat soldiers including former prisoners of war. She also met 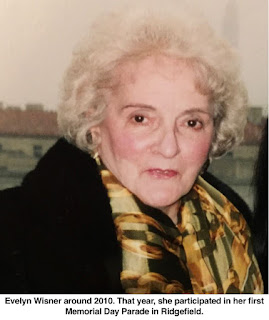 her future husband, a Navy dentist named Edwin J. Wisner. He died in 1985.

After her discharge in 1946, Wisner continued her nursing career, working for years as a  neonatal special care nurse at a Michigan hospital. In 1990, she moved to Ridgefield to be closer to her daughter.
In 2012, she was named a “Hero of Western Connecticut” by the American Red Cross.
She died in 2018 at the age of 98. She was survived by three brothers who all fought in World War II and all came home.
Although she and her siblings all survived the conflict, she did not look back fondly on her war experiences and disagreed with those who might call World War II a “good war.”
“Wars are pretty nasty stuff,” she said. “I always said if a woman ran the country, there wouldn’t be as many wars because women have children and women have sons.”
But Wisner was also not without a sense of humor about the experience. “No one goes through a war without feeling it somehow,” the 89-year-old said. “I tell my daughter that I wouldn’t look so old if I hadn’t been in a war.”