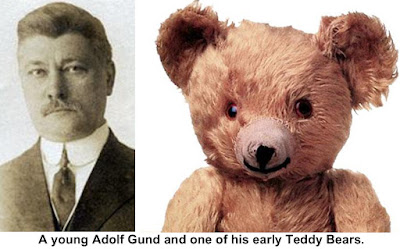 Adolf Gund:
Ridgefield’s Geppetto
To Ridgefielders in the 1930s, the old man with the German accent might have been Geppetto. Working in his shop in the barn behind his house on North Salem Road, the   white-haired retiree created marvelous stuffed animals, many with innovative moving parts. People came from far and wide to acquire his creature creations, made mostly because he loved to make them.
The man was Adolf Gund, who years earlier had founded the Gund Manufacturing Company, “creator of novelties” that included some of the earliest Teddy Bears.
Today Gund stuffed toys are sold around the world, both new and as antique collectibles, thanks to a man who loved making things for children but who had none of his own.
Adolf Gund was born in 1869 in the Bavaria section of southern Germany, and came to the United States in 1894. Four years later in New Jersey, he married Luise Bigler, a fellow immigrant from Germany.
That same year, Gund established a small toy company in Norwalk, Conn. Probably to get closer to more potential customers, he soon moved the operation to Manhattan where it was incorporated as the Gund Manufacturing Company.
There he continued to design toys, especially plush animals, sometimes with fairly elaborate moving parts for which he obtained several patents. Some could walk, some could dance. One could jump, thanks to a spring mechanism, “bringing it to life.” He also patented a large-sized duck that children could ride on; as the wheels moved, the duck’s bill opened and closed.
Gund was not only an innovator in the toy world, but a strong believer safety. One historian says he created some of the early safety standards for toys.
In the early 1900s,  along with Steiff, he was also among the first to produce Teddy Bears, capitalizing on a much publicized incident in which President Theodore Roosevelt was reported to have refused to kill a captured bear. Gund Teddy Bears are still being made today.
In the 1920s, Gund hired a Russian immigrant named Jacob Swedlin, teaching him to become a cutter and pattern-maker in his small factory. He liked Swedlin and eventually taught him the business operations of the company. In 1925, when he decided to retire, Gund sold his company 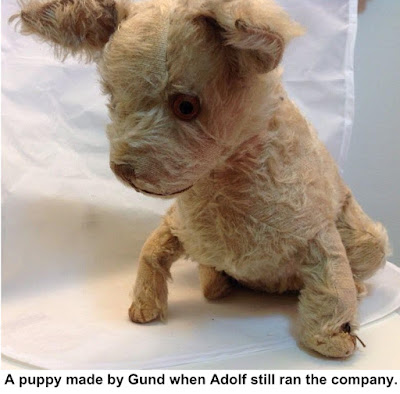 to Swedlin for a mere $1,500 — about $22,000 today. Perhaps the low price reflected their friendship and also Gund’s requirement that the company always bear his name. To this day, after being led by three generations of the Swedlin family and now owned by Enesco, a European conglomerate, the brand name is still Gund. And the motto for many years has been “Gotta Getta Gund.”

Soon after he retired, Gund moved to the country, buying a farmhouse in 1927 at the corner of North Salem Road and Wooster Street. Why here? He probably knew Ridgefield from his days in Norwalk, but he also had another connection: His half brother, Fritz Gund, a book-binder by trade, died here in 1915. He is buried in Ridgefield Cemetery.
Though retired, he continued to make toys in a workshop he set up in a barn on his property. These one-of-a-kind creations were sold to people who admired his work and didn’t mind driving hundreds of miles for a hand-made Gund. The barn he worked in was later converted into a house.
Although much of his Adolf’s life was spent creating stuffed toys that entertained youngsters, he and Luise had no children. In 1936, Luise died at the age of 64. She is buried in Fairlawn Cemetery. Two weeks after her death, Gund sold his house and moved back New York City where he died in 1945 at the age of 75.
Most Ridgefielders — then and now — were unaware the toymaker had lived here, probably because he and his wife were a quiet couple who kept to themselves. But as a young man, town historian Richard E. Venus knew of him.
“Adolf was a master toy maker and  used the barn on this property for his shop,” he wrote in a Dick’s Dispatch column in The Ridgefield Press. “He enjoyed such a reputation as a fine toy maker that people traveled great distances to purchase his handiwork.”
But even in 1982, when he wrote his column, Dick Venus didn’t realize that the very private Adolf Gund was the man behind a thriving company that has brought smiles to the faces of hundreds of thousands of children who’ve loved his stuffed toys for more than a century.